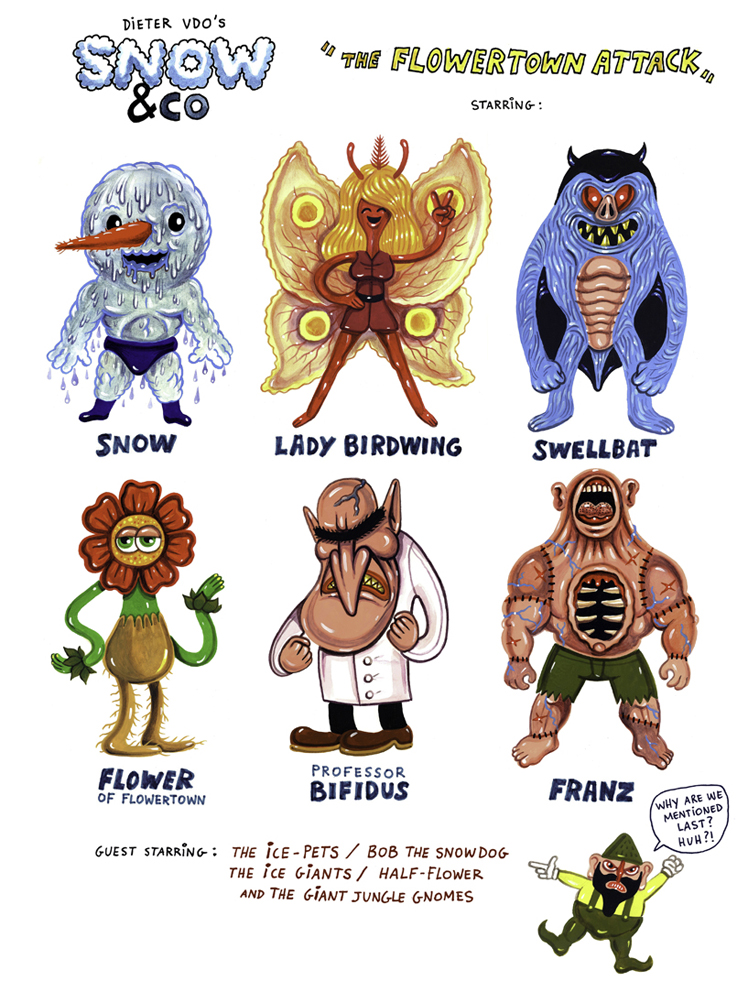 English version on my Tumblr.

Dutch version on my blog. 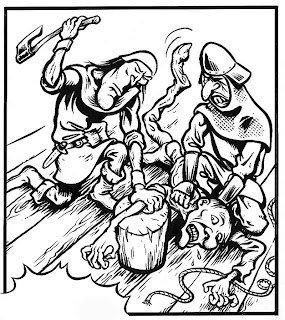 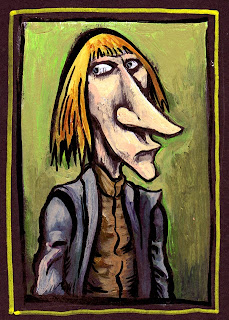 work by a fellow artist Jon F. Allen he's from my neck of the woods. 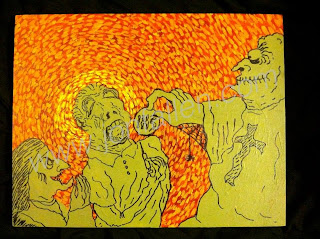 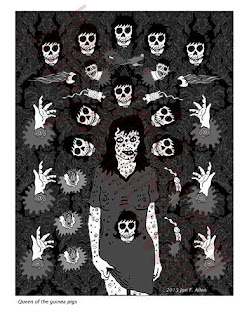 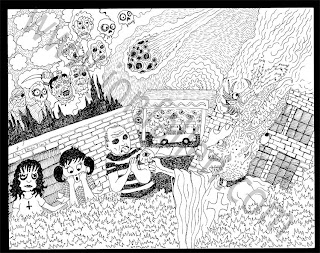 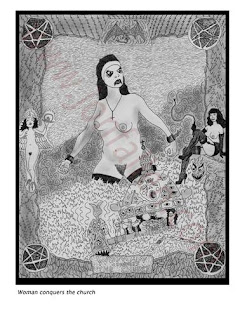 Chuffed to bits to have just done this artwork for 12", CD and Tape release of first full length record by Leeds (UK) based surf-violence gang Los Pecadores. You can hear their tune 'Rogue Robots' in this video made by Ela Orleans using scenes from 50's scifi thriller The Day The Earth Stood Still. 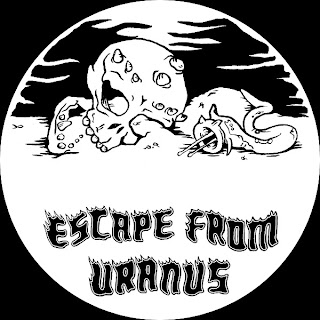 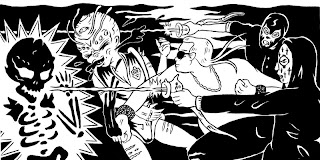 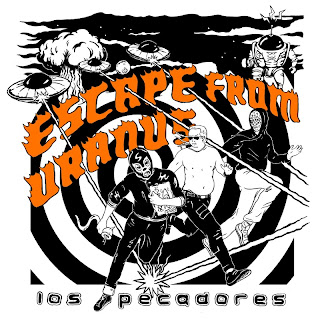 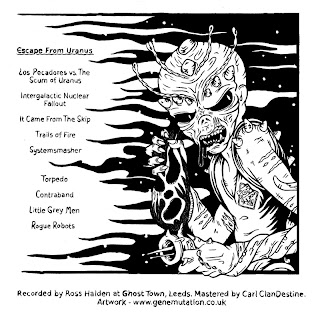 I did a job for Planetaldol & 3patttes label, which is my first real account to music design... I'm really happy of that because it's one of the first reason i started doing drawings...

So, it's a CD with digital inner print + silkscreend fold out which is both a poster and a short comic.

Music is dark ambient with some noises & Anneliese Michel interference. For those who didn't know this girl was the inspiration for movies like The Exorcist or The Exorcism of Emilie Rose, recording of her exorcism is listenable on internet ; http://www.dailymotion.com/video/x36pam_exorcisme-reel-d-anneliese-michel_news 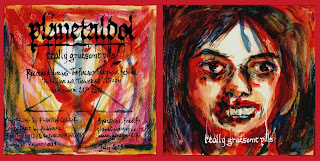 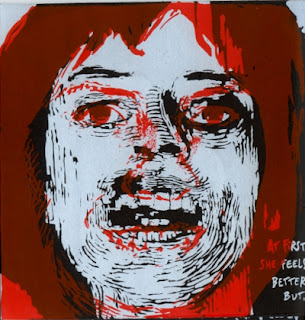 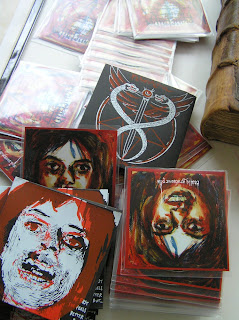 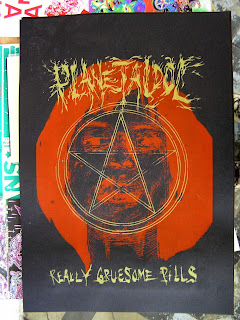 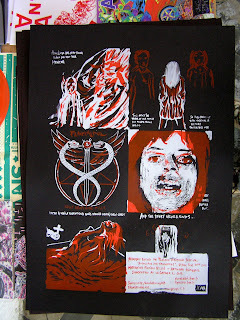 I didn't have a scanner for a while and I mostly done this stuff earlier in the year and despite having enough time to do a book worth of drawings, I never taken advantage seriously enough as I thought I would. I wonder if there is any point in commenting on these, I could easily say "sometimes shit happens, sometimes it turns out better". But since I rarely have anything new, I'll say some things. 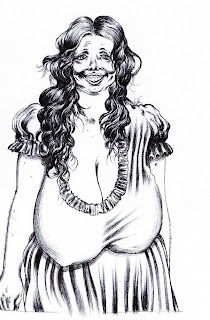 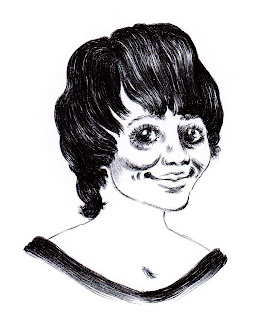 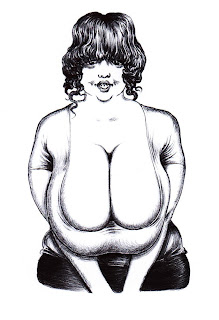 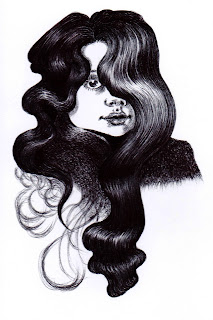 I really screwed this one up. I tried coloring with pencils plus brush washing but it damaged the linework on the face and I tried to darken the facial lines again but it really taken away the delicate touch I was proud of. You can also see the rendering toward the bottom of the image gets progressively lazier. But I still liked it well enough.
I really want to be good at ink+color because it will be essential for some ideas I need to execute in the future. It really knocks me on my ass when I realise how far away I am from being good enough to get things even half way the way I want them. I just imagine all these things and think "yeah, it'll be great" but then when I get to it, I'm amazed at how I'm not nearly as capable as I thought I was.
All the more reason to be more relentless in my drawing and painting. I'm sure hundreds of people have ideas that look great in their heads, but getting it done is what counts. I recently read some guy say something that slightly chilled me, he said that countless promising artists just get lost in their thought processes and never achieve even a small amount of what they could have. It is pretty horrible to think how many really great artists probably never stepped up to the challenge. 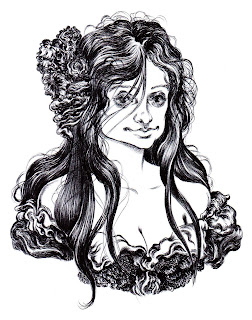 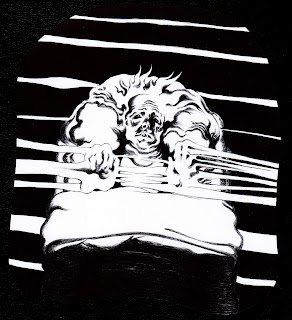 Early this year I posted a small face and that was an earlier attempt at this image. I want to make other versions of this idea because the idea hit me really hard and although I fear repeating myself too much, I've really came around to the notion that some ideas need several versions to really breathe fully.
I need a black background paper for my cut out images; as you can see, I used a leathery looking book cover. For my older scanner I just left the lid open and I would get a black background because it wasn't powerful enough to see to the ceiling.
EDIT: I fixed the mid-tones of the images, they were way too light the first time I posted them.
Posted by Robert Adam Gilmour at 8/03/2013 06:54:00 AM 4 comments:

Passed the 50 pages border some time ago, now working on chapter 4 of my graphic novel on Jheronimus Bosch. Surely there will be mistakes to fix, but feeling like i'm well on my way now. It's not going to be just a bunch of guys sitting around painting. There will be blood in this chapter. It starts with a visit to the dentist, then it gets worse.
Posted by Marcel Ruijters at 8/02/2013 05:31:00 AM 4 comments: