I would like to bring to your attention a very funny and interesting entry on historian Erik Kwakkel's blog (in English) on the use of speech bubbles and other comic-like means of visualising speech in medieval manuscripts. He's always good, but it doesn't come more comic-y than this.
Posted by Marcel Ruijters at 1/27/2015 01:38:00 AM 1 comment: 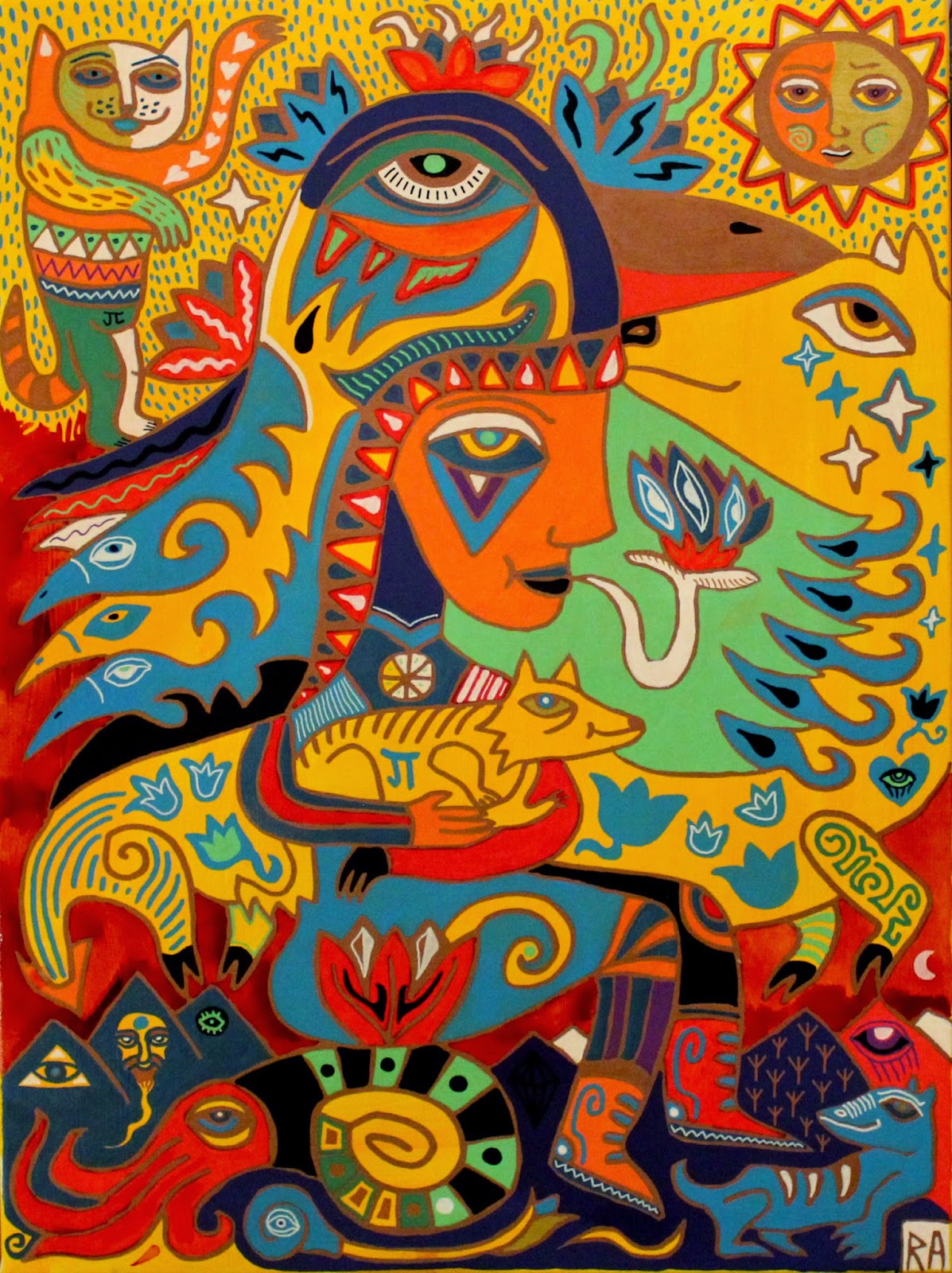 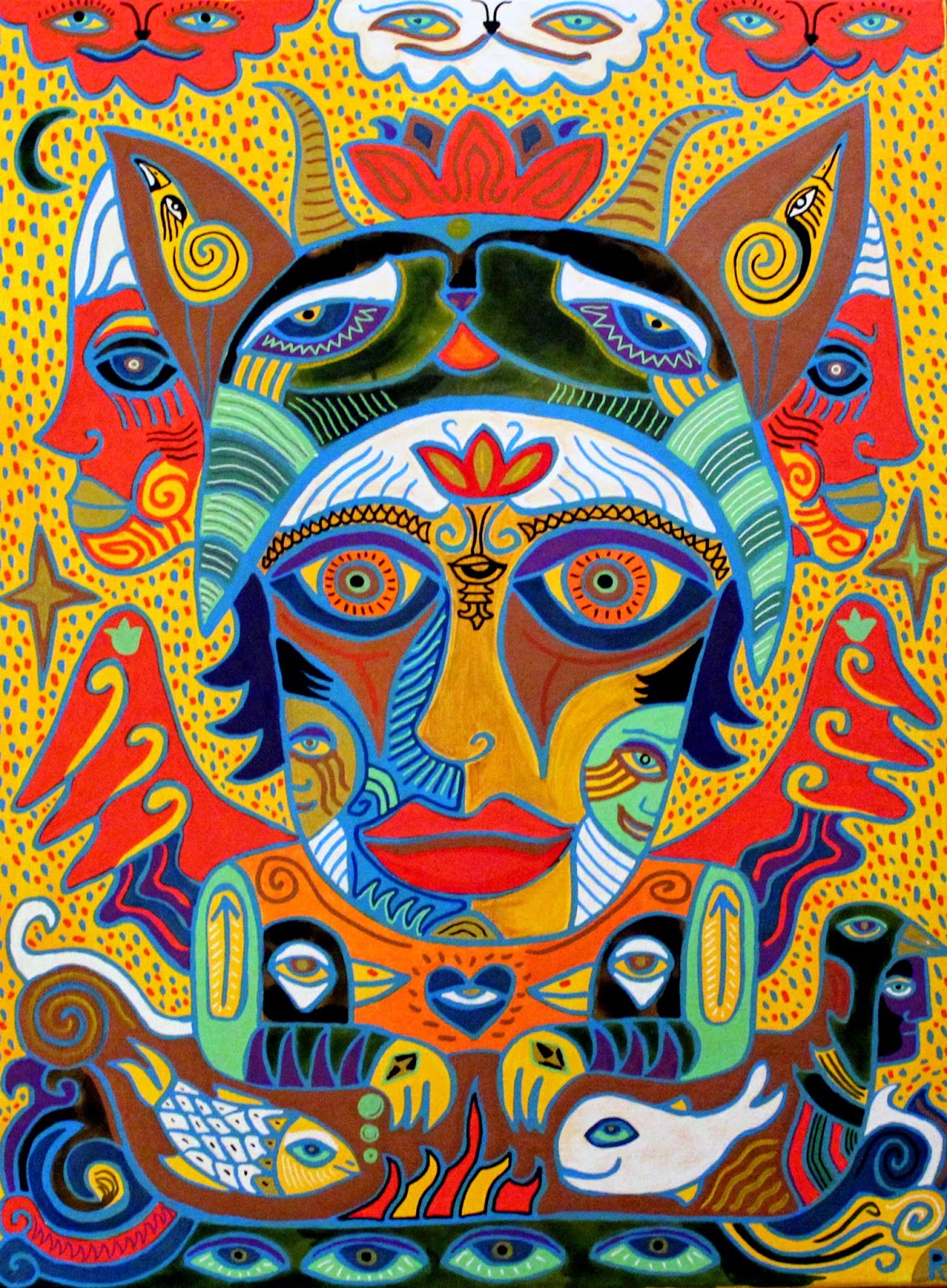 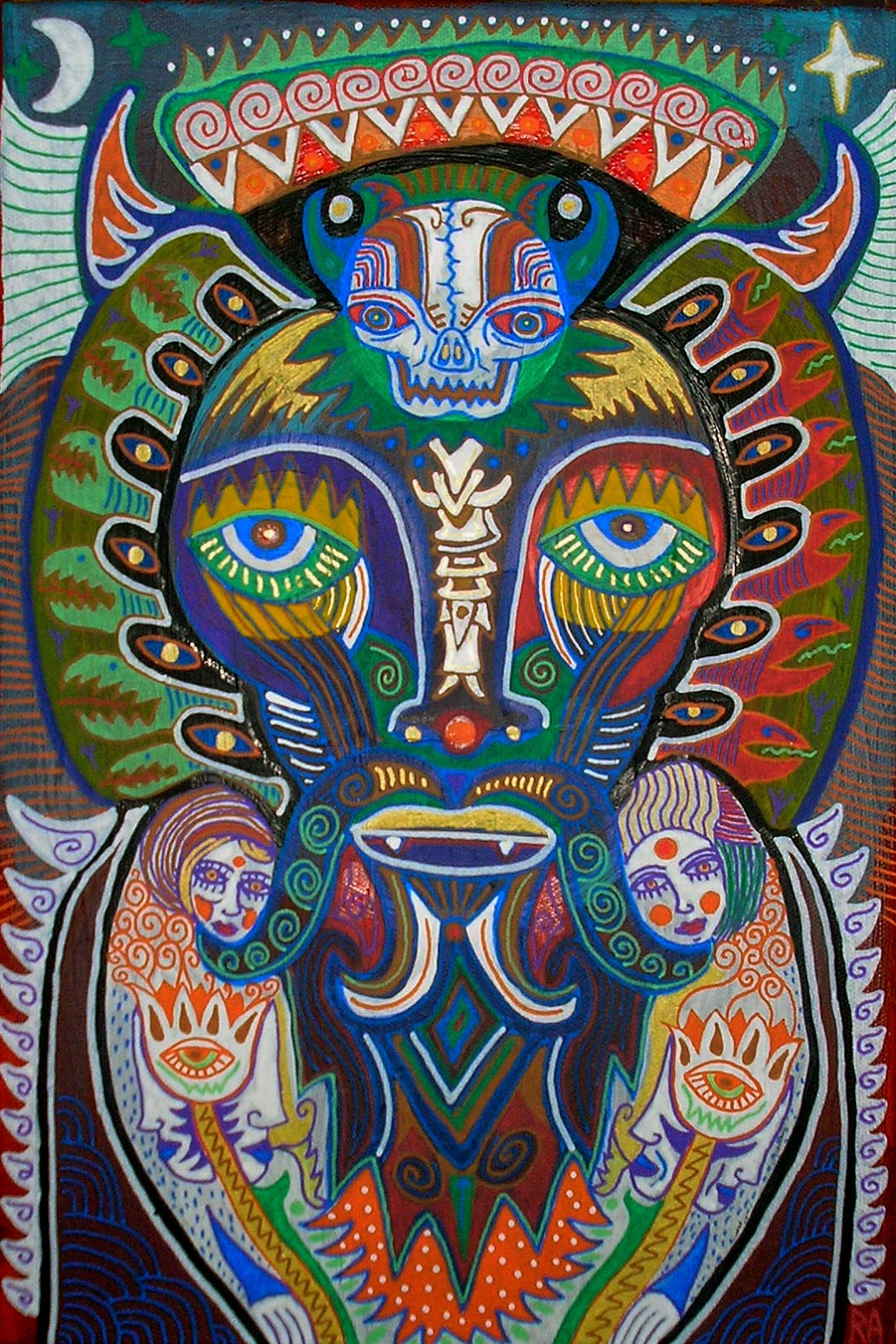 The year 2015 had already started in a cruel way with the assault on the creators of Charlie Hebdo. We all heard about that ad nauseam.

Today, the sad news came of the death of Peter Pontiac, Holland's foremost underground comics artist. He was 63. Unfortunately, not much of Peter Pontiac's outstanding graphic work has been translated into English, so he may not be a household name, but he is to Holland what R. Crumb is to the US. (He was a kind and very modest man who would have objected to that comparison, for sure!) 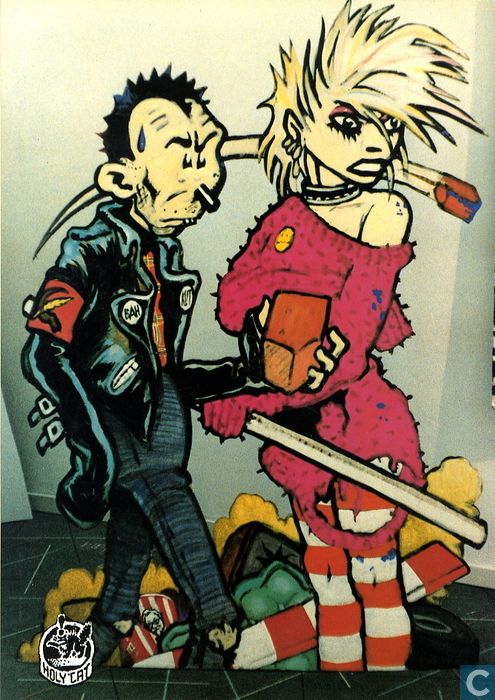 His work has always been rooted in rock 'n roll and punk. In 2000, his graphic novel Kraut was published. It's a haunting tale about his father's shady war past and even shadier disappearance. Its flowery language combined with intricate hand-lettering proved quite difficult to translate, so it hasn't gotten the English edition it deserves, yet. You can find some background information here. Peter Pontiac never made a secret of his drug use during the 70s and 80s. It eventually caught up with him and destroyed his liver. He regretted it as a big waste of time and was working hard to finish what he envisioned as his last book: STYX, about death. When i  last met him, a few months back, he was fairly optimistic about its progress, but it was not to be. Alas! 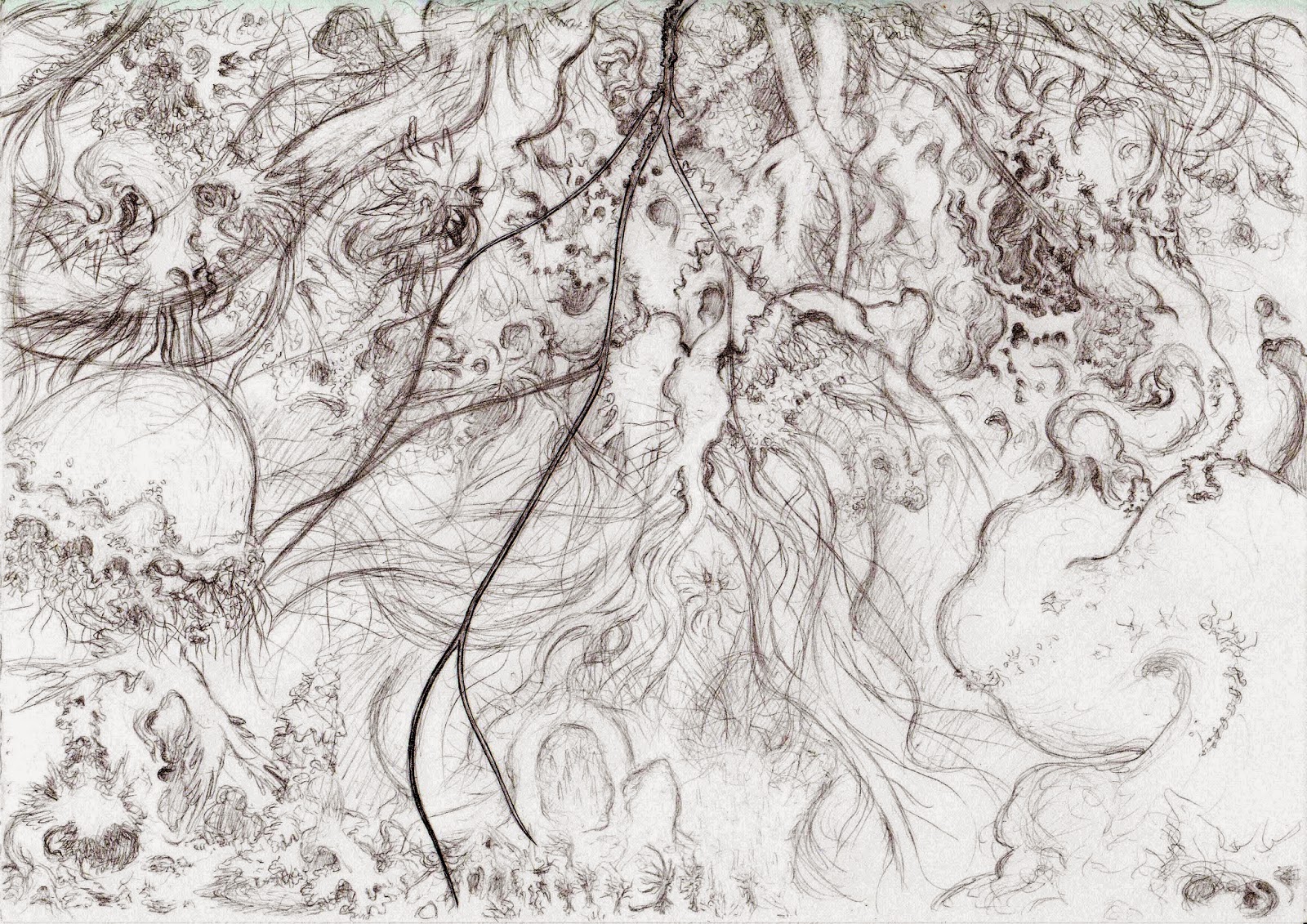 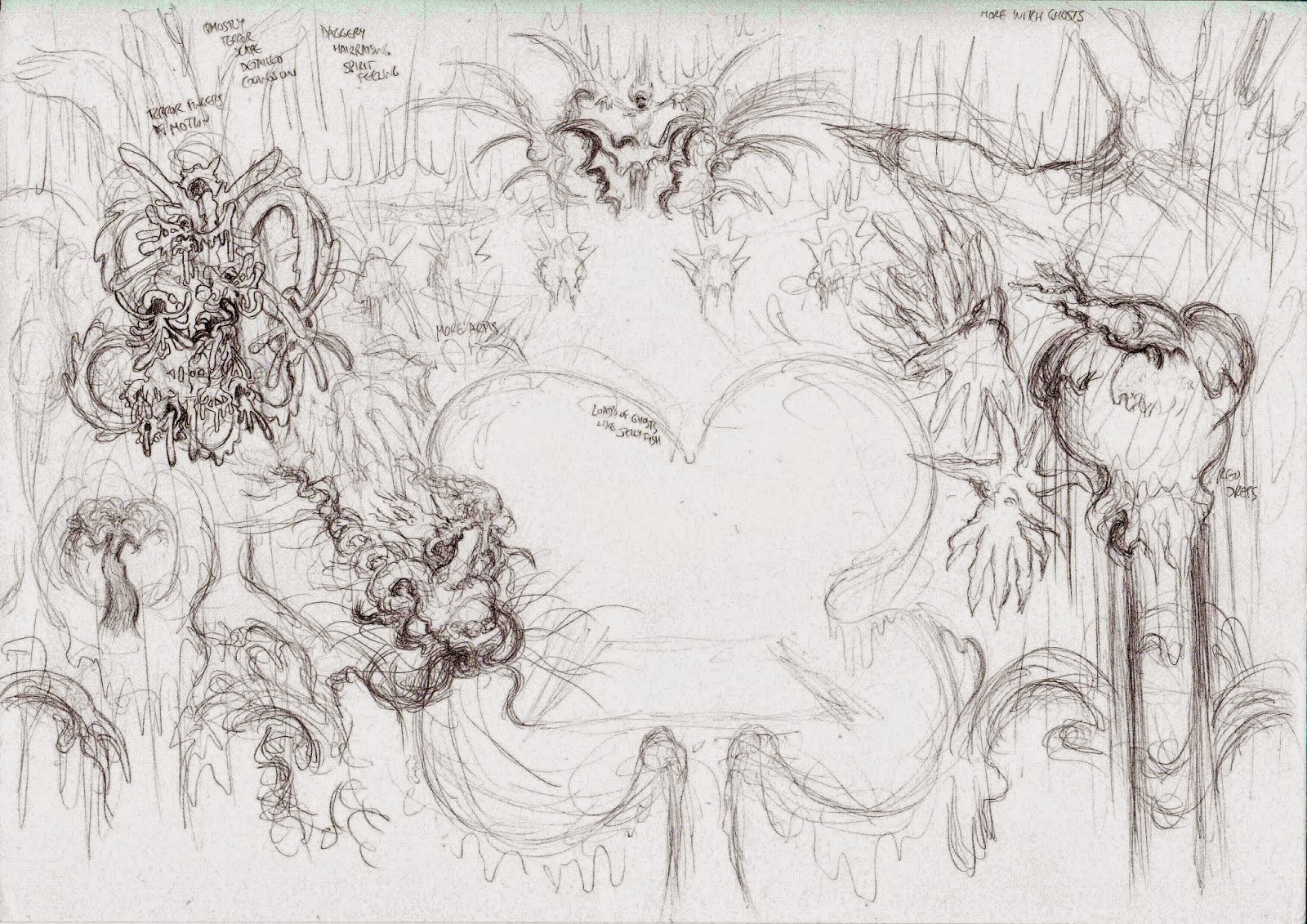 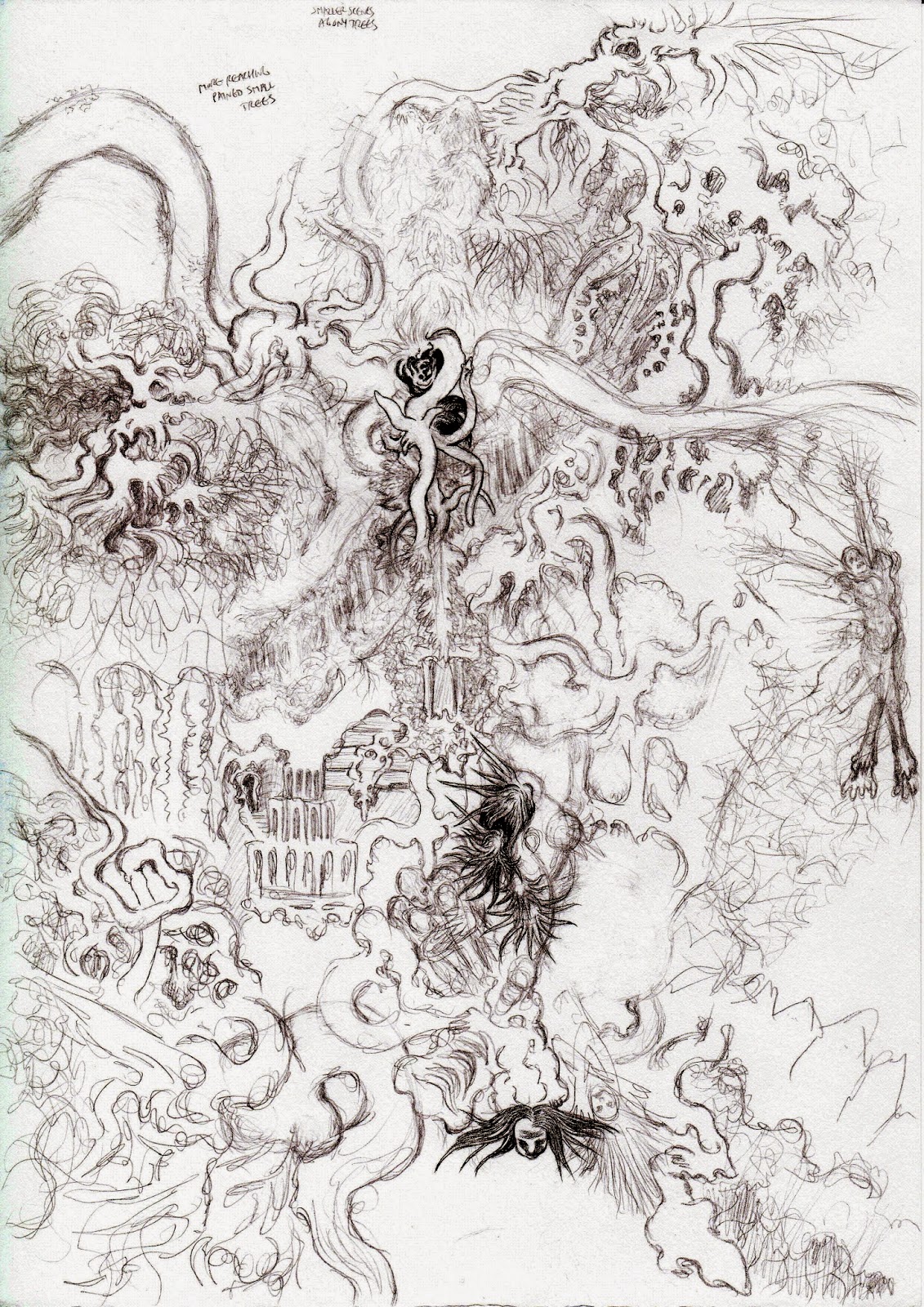 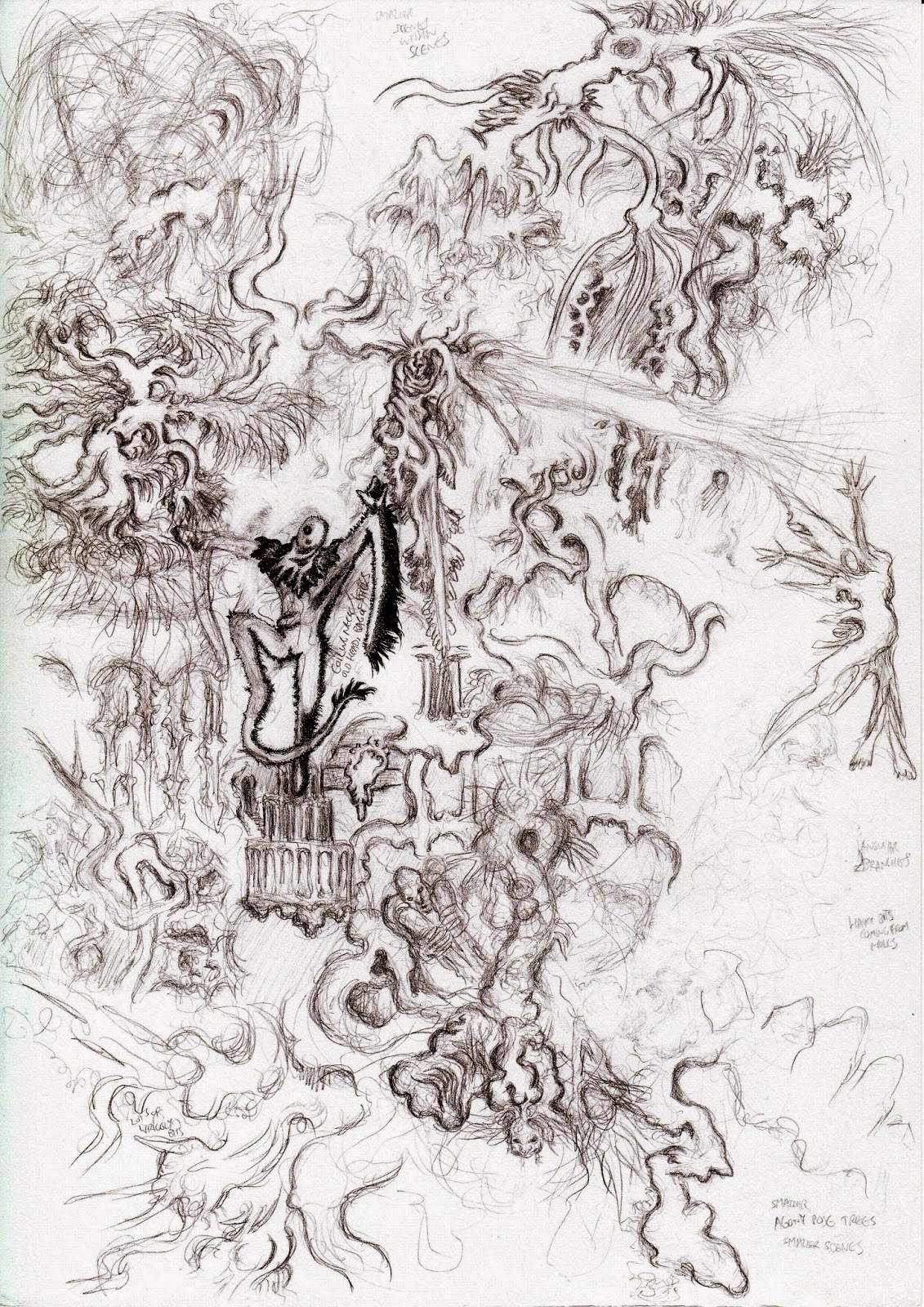 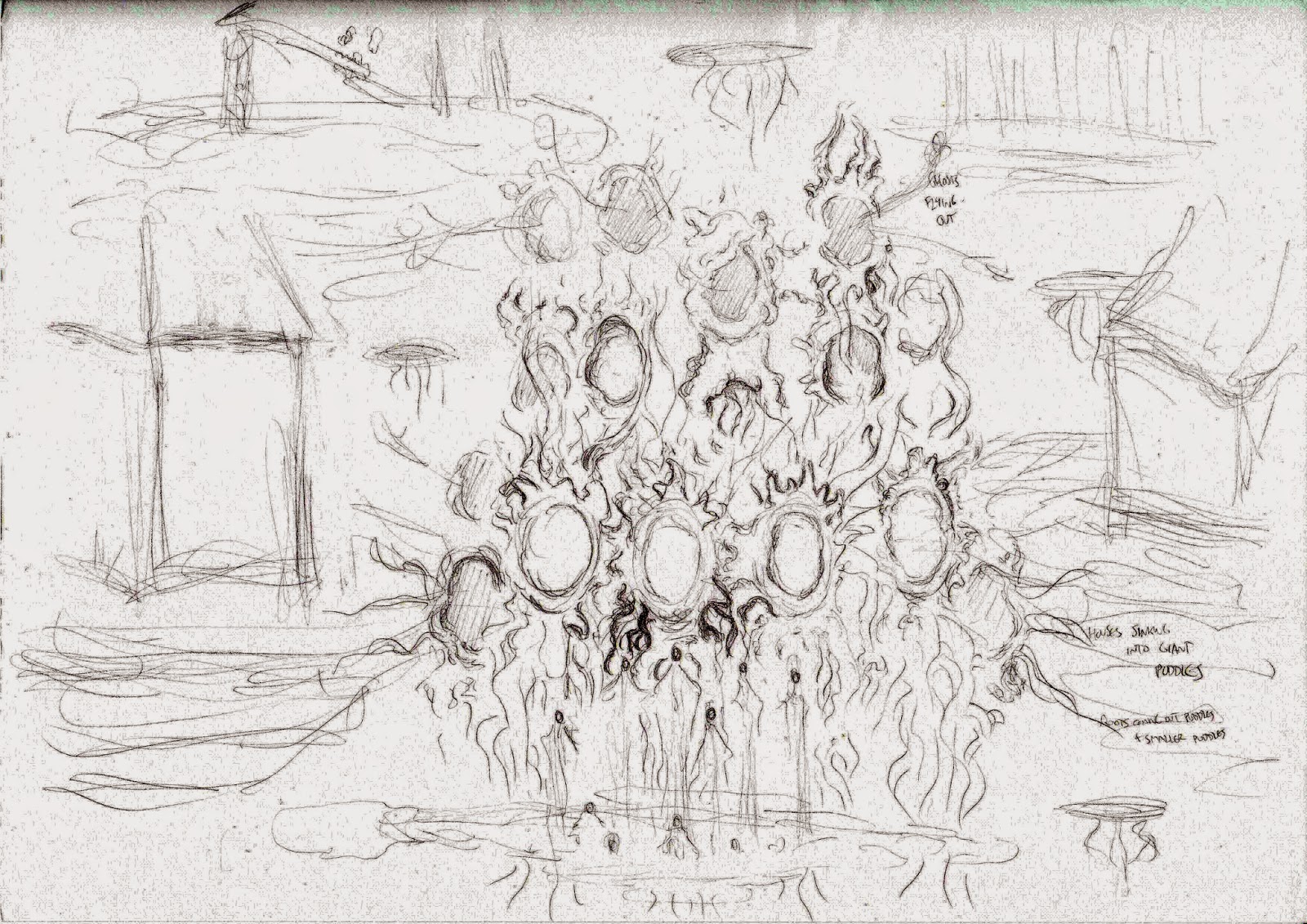 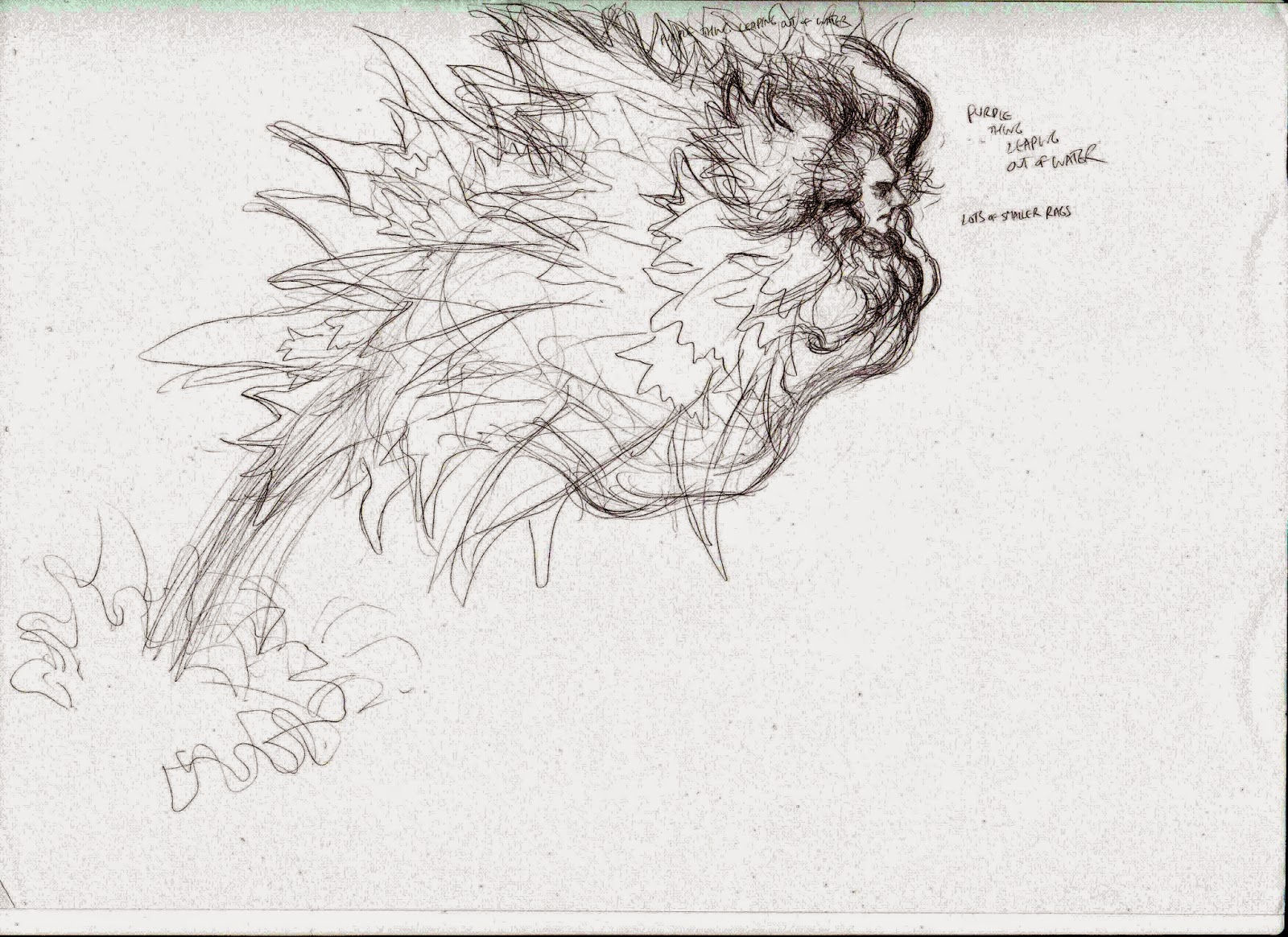 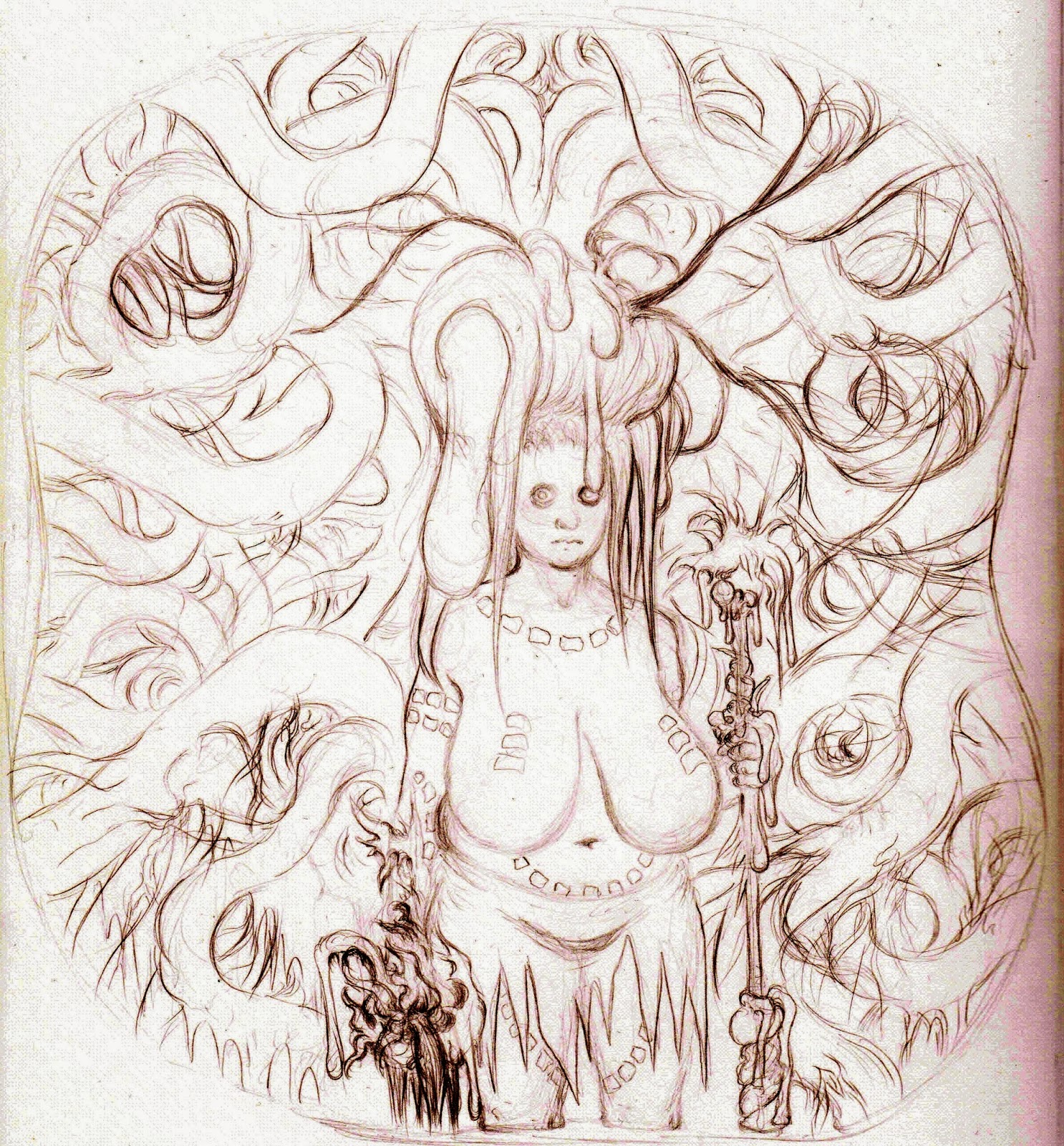 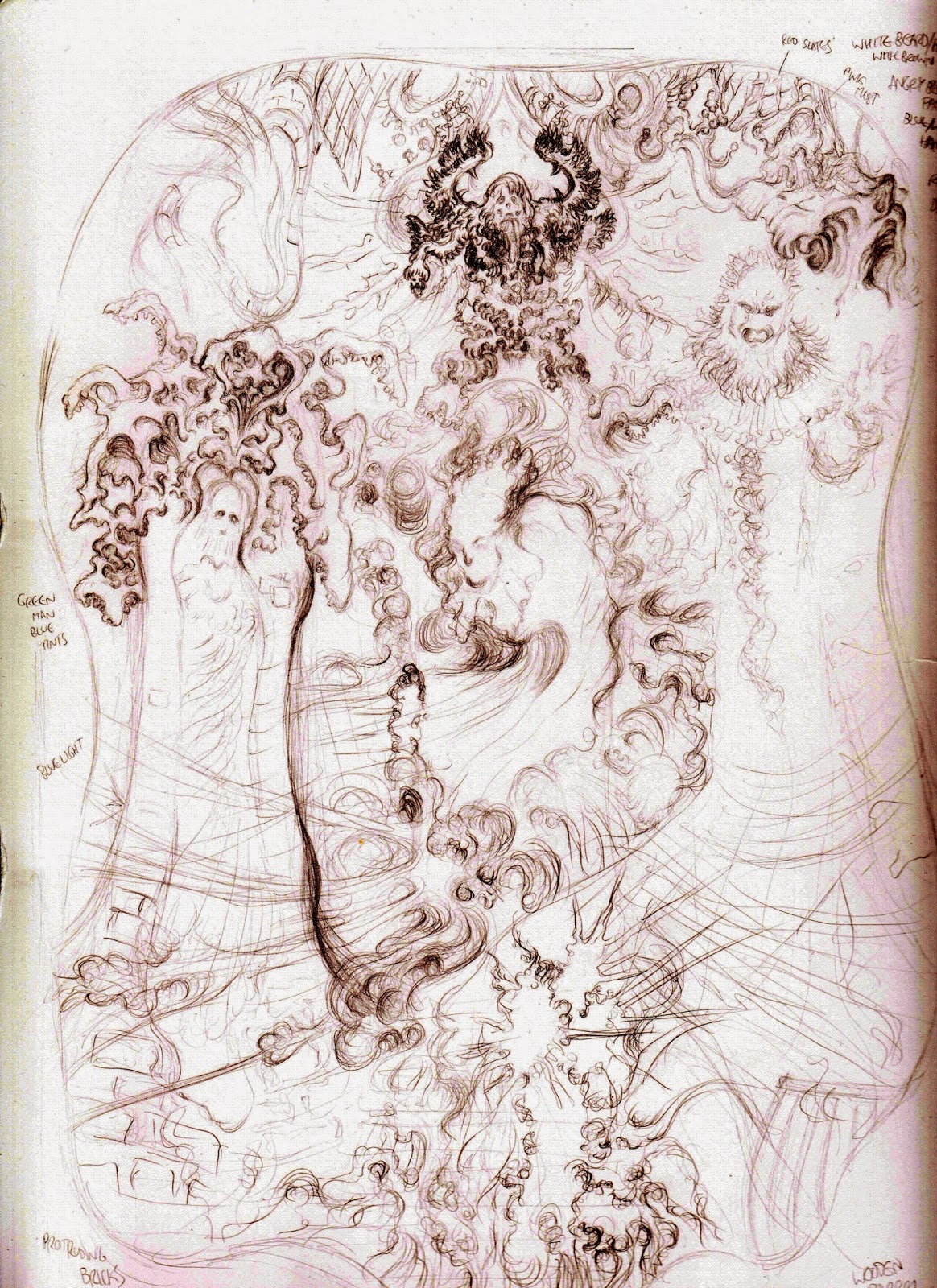 I previously didn't want to do work in progress scans because (1) it might take the impact away from the final image (2) the final image might be a disappointment to those who felt the sketch showed more promise, particularly since I'll be coloring some of these and I'm not that confident about my paint skills yet but it really needs to happen (3) I'm worried I'll get lazier if the gist of the image is already there for everyone to see, that'll I'll maybe feel more complacent about finishing; sometimes I talked about drawing castles so much that I forget I haven't actually done that many finished pictures with castles.
On the other hand (1) maybe this will be a good thing that takes the pressure off a little, maybe I'll draw more because a certain stage of these drawings are saved and I don't have to worry about the images being completely destroyed in an accident before they are seen in any form, because some of these take a very long time even if I was drawing as regularly as I should (2) I think a few of these are going to be my best work and maybe being too precious about the impact they make when they're finished will steal away from future efforts, as if I'm putting them on too high a pedestal when I should think about always going onto better things all the time.
There are way more unfinished drawings but most of them are even more vague than these.

water from the well for you to drink 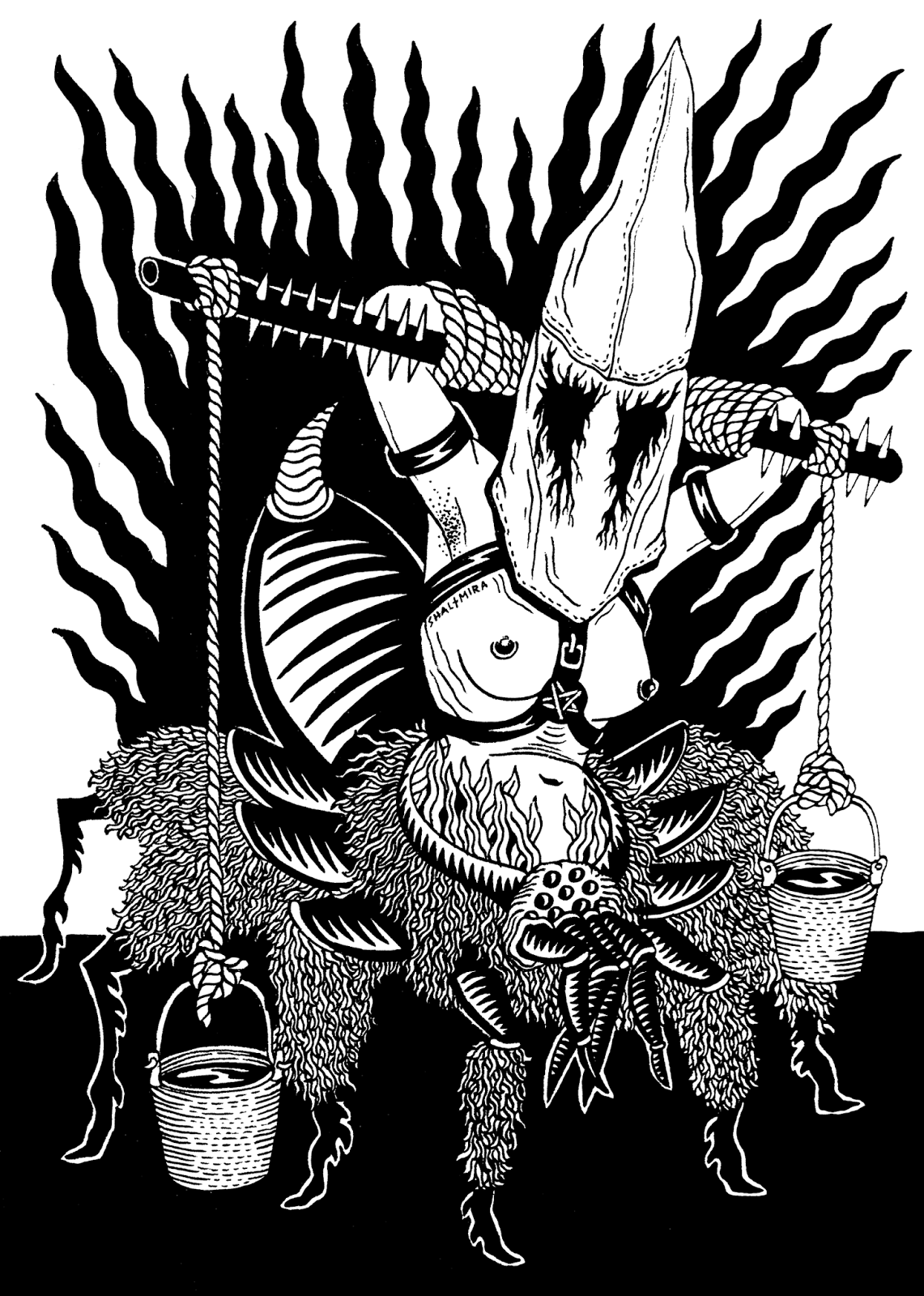 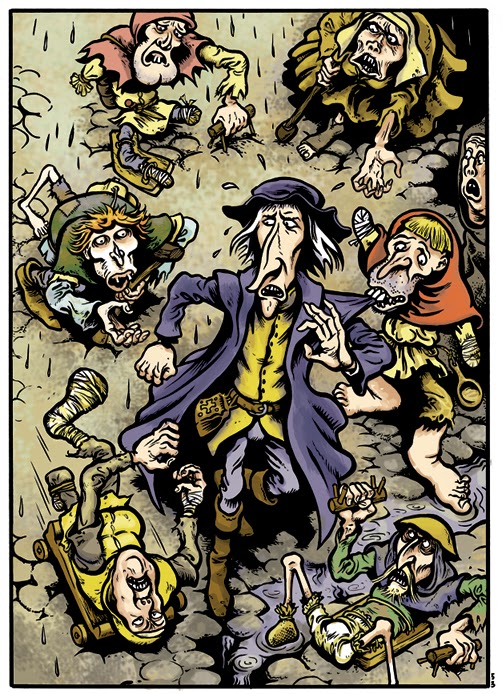 Much has been said about Bosch being very rich and therefore he could paint whatever he wanted, but this is nonsense. In those times, artists worked on assignments only. And success did not come overnight for Bosch. Only after around 1500, he became an international household name. But even then, it remains unclear how much he was paid for his assignments. I suspect that it may not have been as much as superstar painters like Van der Weyden or Cranach the Elder. What we do know, is that he belonged to the class that paid the most taxes in his city. A telling fact is that he left no money after his death.

By our standards, the life of the rich was not that great, so that of the poor must have been, well, shit.

The resemblance of this composition with that of Martin Schoengauer's Saint Anthony is damn intentional.