Came across a short film, made after one of Miguel Angel Martin's comics. Martin has a reputation as one of Spain's most controversial underground artists, i believe, comparable to Trevor Brown.
Actually, it turned out funnier than i expected. Creepy enough, though.

Partying on the ashes of progress

well, just another linocut, A3 size 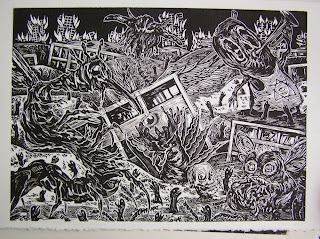 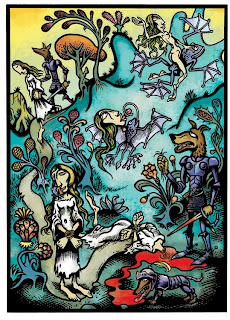 I've been reading a rather unconvincing book about the use of hallucinogens in the Middle Ages. The idea that such things have been suppressed reeks of conspiracy think. Hard to disprove also.
If medieval art (Romanseque especially) looks like it has been done by people who were high.drunk/mad autistic outsider artists, it does not mean that that is what they were, but that is popular fallacy that's hard to uh, suppress.

Hey everybody, I recently moved back to Berlin after an intersting and eventful year in Portland. Sorting out my stuff I found a bunch of new telephone doodles which happened mostly while talking to my friends and family overseas.
As usual I don't even recall doing the majority of these.

Hello, Ducks! Been working on a pretty big project for me- maybe not in scope, but in quantity of work needed. It's a wrestling card game involving creatures from the Lovecraft mythos, oddly enough. It's fun working on, but I need to do 120 card illustrations (less than halfway done with that) in addition to cover art and card design, which I've already completed. The first two decks are for Cthulhu and Hastur. I don't know much about these types of card games, but I gather that each player gets one deck and then they challenge each other card to card.  Anyway, here are some of the illustrations, which are intended to be comical. 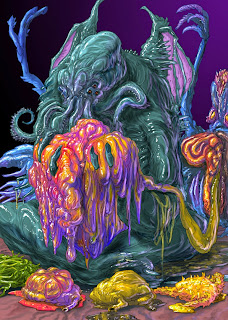 "Organ Donation." I think they actually expected more comic book-like artwork, so I kind of overdid it style-wise. I'm allowed to use pretty simple backgrounds, though. I'm not sure that the gutted creature in the background reads so well, but I guess it's okay if people notice that only upon closer inspection. 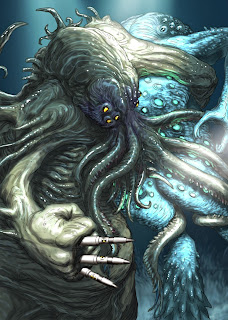 "Nuke to the Ass." There's a lot of butt-related humor involved in these cards. 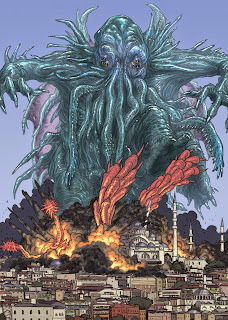 "Glomp Stomp." For some drawings that involved cities, I used cities from all over the world, to show that Cthulhu was an equal opportunity demolisher. I'm still not good at making monsters look huge, so I need to work on that. Just desaturating the color and making them look faded (in this case, more blue) in the distance doesn't seem to do the trick, but it will have to do for now.

Did you mean: extreme capitalism? 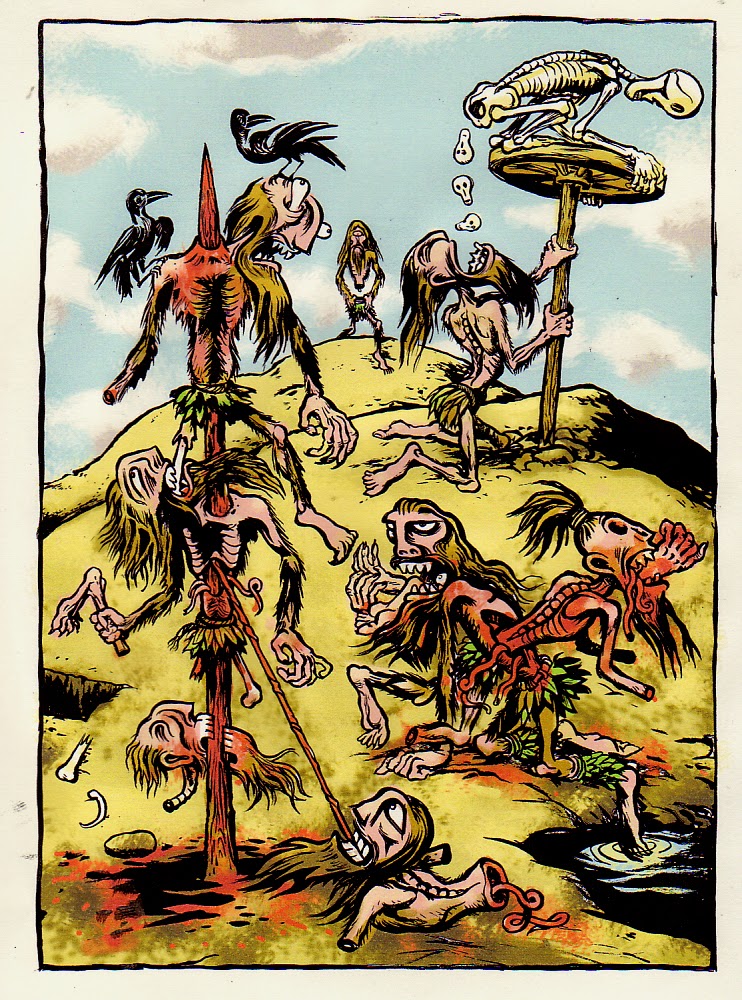 Working on a new series of drawings on the theme of "extreme cannibalism".

This is a study for one of them, to see if it would work when i use a brush in stead of markers. It doesn't. I suspect brushwork evokes a kind of naturalism that is at odds with the medieval skewed perspectives and anatomy, which is a more symbolic way of drawing. Isolated details look OK in this technique, but not the whole picture. Lesson learned...