Tropes versus Lovecraft - Part 3: The Eye of the Beholder

Here’s the third, long-awaited (as in "almost nobody will ever read this") trope of lovecraftian iconography (Part 1, Part 2), one that I have come across time and again. 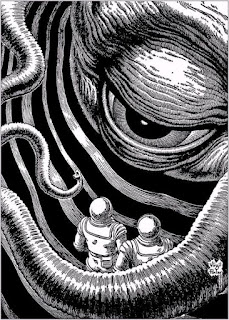 I call it „The Eye of the Beholder“ (obviously not very original, but I couldn't think of anything better) and the Virgil Finlay illustration above is basically a subtler proto-version of the trope, while this great one by John Coulthart is more like the real deal: 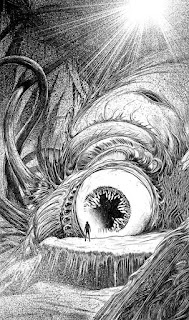 As with „Under the Surface“(UTS) the trope is not so much an interpretation of a specific scene from a given Mythos-story as it is an archetypical representation of the philosophical outlook typical to a Lovecraft story. In UTS, the pitiful ignoramuses above have no inkling of the real nature of their situation, the viewer is let in on the secret so to say, and can see the true horror of what lies underneath.
By contrast, here we are put into the situation of the puny figures in the foreground and are thus forced to identify with them, since like them we mostly do not see what it is that is staring at them (or us). Because we can see only its gigantic eye, a body part that is normally rather small in our view, we are forced to extrapolate the size of the being that is looking at us here. This has an effect similar to a Lovecraft’s strategy of producing horror in his readers: Don’t show the monster - just give the audience enough info to set off their own imagination. Lovecraft himself does this in „The Shunned House“,  but instead of an eye the protagonist digs out a massive elbow in the basement of a haunted house, which, to be honest, always felt more comical than horrific to me.
Another aspect that makes this trope effective is that a giant eye causes a twofold psychological reaction of both a visceral feeling of uncomfortable closeness and, perhaps more importantly, a recognition of sentience. I wonder wether the ending of „The Shunned House“ would have had more punch if there had been a giant eye which opened and glared at the narrator from out of that hole in the ground...

So here are some more examples. I've definitely seen others, but overall this one seems to be less common than „Under the Surface“. 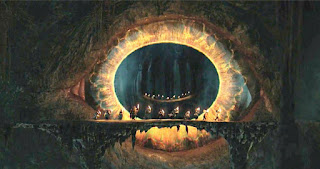 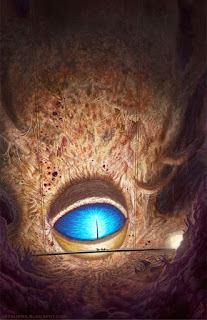 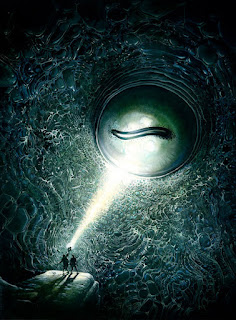 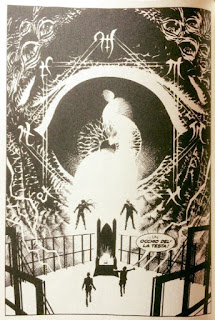 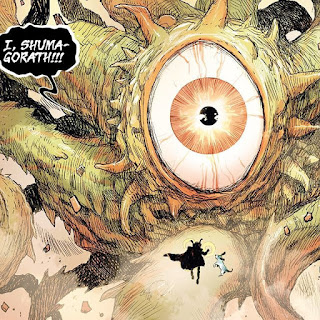 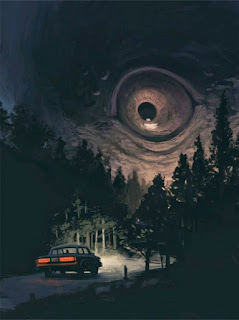 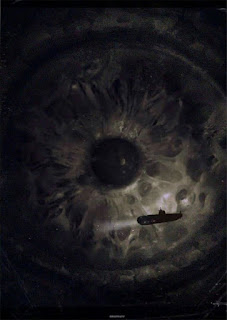 Again, this post is not meant to critique any specific artist or piece of art. I don’t know most of the creators’ names but perhaps given the context of this post it’s perhaps not in their interest to be credited here anyhow. If any artist would like to be credited (or if they want their artwork removed) please let me know and I shall do so.