Alright, here's my bit. I'm Aeron Alfrey, I make comics, paintings, drawings and digital collages. I went to the Herron School of Art in Indianapolis until the end of my junior year. I focused on painting, art history and print making. I had a serious problem with the art school scene as I despise a lot of the non figurative abstract (drip painting) junk that is so highly regarded there. But I do miss having a giant painting studio where you're surrounded by dozens of unique artist spaces and all the weird sketches and paintings everyone would have scattered in their work zones.

As of now I'm working on a book titled "Hob Bob" which is going to be between 600 - 1,000 pages. The story concerns a magician named "Hob" who is framed for murder by his evil twin magician/wizard brother "Zob Bob" who has him executed in order to steal a strange collection of eggs that he transforms into a horde of monsters to destroy the world. Hob is decapitated and his body escapes into the wilderness. The book revolves around the weird adventures Hob's decapitated body, his head and Zob Bob get into. While I'm keeping the story simple and without words, it's more an excuse to show off an incredibly detailed fantasy world and all the strange inhabitants that exist in it. This sketch shows Hob's headless body wandering over a rock formation as a tribe of creatures that resemble giant paint brushes pass along the ground below. 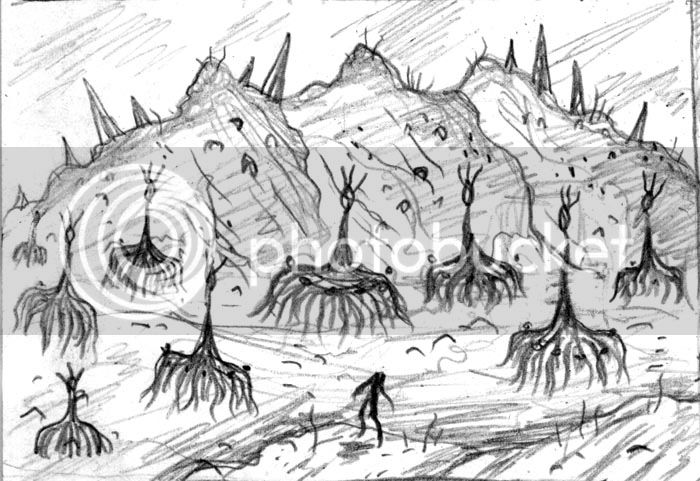 I have another book project titled "The Land Of The Moth" which is entirely made of digital collages. Some of the heavier influences are Joel Peter Witkin's photography, the writings of Lewis Carrol and the digital works of Alessandro Bavari. It's to be a sort of dark fairy tale for adults made up of large black and white digital illustrations. It's a fantasy world focused on death/horror and the fantastic. You can see some older examples here.

Those are my two favorite projects that mean the most to me. Beyond those I have dozens of other smaller projects. I'm doing a book of 1,000 monsters that has been really fun. I've got some drawing and painting series that I'm planning out. One series will be the architectural insides of surreal haunted houses. I did drawings like this as a child, none of which I still have. As an example of my obsession with the strange and monstrous, click here here and here to see drawings I made somewhere around the age of 7 or 8.

That picture of Hob is gorgeous; it reminds me a little of the John Christopher Tripod books for some reason. Have you read those? They're fantastic....

I like the drawings you did as a kid, too. Very nice.

Aeron, i patiently await for Hob Bob, and "One series will be the architectural insides of surreal haunted houses"? that's great! but i gotta do some hollering for you to find time to do a short comic once in a while, like "The Thing on the Window", i like everything you do but that one knocked me over