Here are some new Trolls... i'm slowly working on a Troll book that i gain & lose interest in as the cosmos ebbs & flows. I've been painting the Library at our new house, dark red with white trim. The shelves will be white as well. With a big green chair in there. Or maybe a couple of smaller orange ones. Not sure yet. This is the first house i'm going to be living in where i've had any degree of ownership. I've lived in rentals all my life. 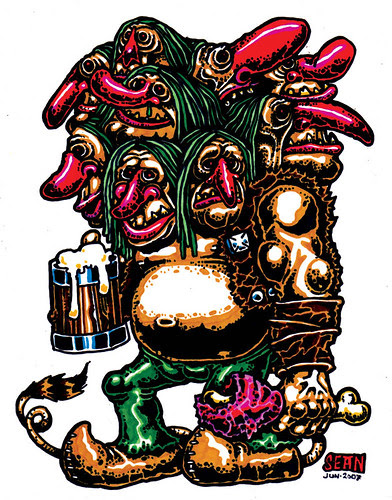 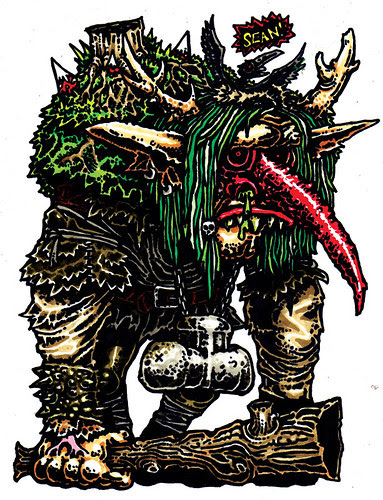 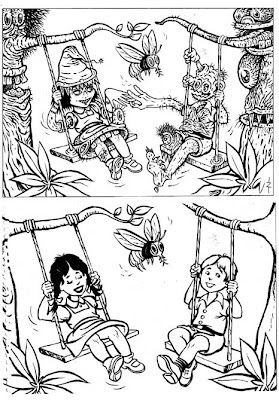 Dave Birchall brought a colouring book back from greece and very kindly let me borrow it.

The bottom image is unaltered, straight from the book and the top one is my

version of it done for a friends wedding card. 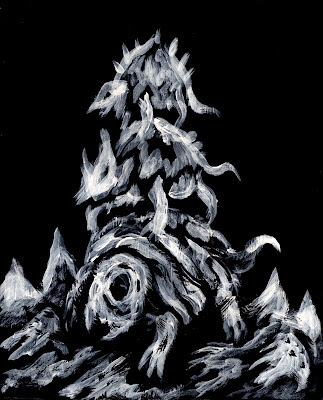 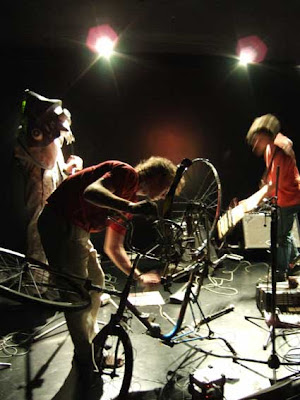 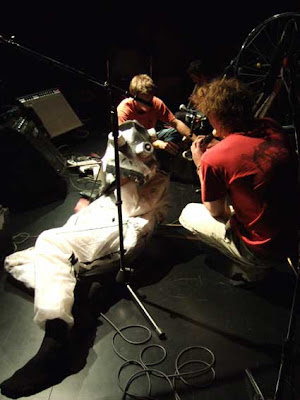 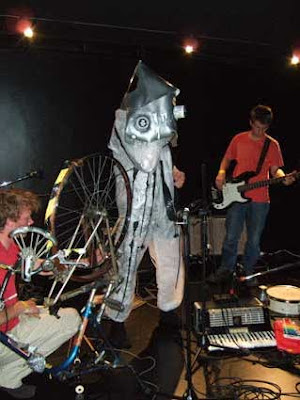 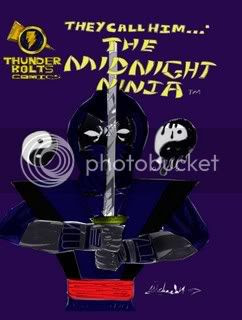 As of today you can now walk into Gosh the London comic shop straight off the street and buy the Midnight NInja Hardcover.It will cost you £17.00.This is the first Bone House volume by an author other than me and is a collaborative effort with Thunderbolts Comics. All credit for the content goes to Michael Adebayo and Robin Callan.I designed the book, put it together, and then fronted the dough to get some copies printed up.See the flickr report HERE!See the first chapter online for free HERE!
Posted by Jon Chandler at 6/18/2007 06:16:00 PM 1 comment:

Metalman inks: the beginning of the end.

I've got to get my piece done for the forthcoming second volume of the Metalman Project. The basic concept is that each participant draws their interpretation of the head and logo of a character drawn by the moderator when he was a young lad. That character would be, ta-da, Metalman.

My depiction of Metalman is as an adventurer who stumbled upon an ancient kult of skull faced cyberneticits. Really, a natural conclusion anyone would leap to. They have an interest in this metal-headed man who possibly teeters half into the realm of a cybernetic organism himself, and they pit him against their ultimate creation. The, er, transvestite, cyborg, cloned dinosaur to the right.

I'm really trying to up the detail level in my pieces, and I think this is a step in that direction:

I bought a tiny sketchbook.

I've only been at this game for about three years, and all my work has been done digitally. I've faced some criticism for not working traditionally (mostly from people who can't stand the idea of working digitally, go figure). I decided to buy a little 4.5"x5.5" sketchbook and some brush pens in an effort to see what all the fuss was about.

Initially, I was skeptical as to the usefulness of practicing in a medium that I don't produce my work with. All my skepticism was soon brushed aside as the ability to sketch whenever, wherever, and with no worry of lugging a tablet around was revealed.

I don't plan on ditching digital for my pencils and inks during final pieces. The ability to undo, cut objects out and move them around to tighten a composition, and the speed of creation can't be beat.

The following pages are from my first day of trying out brush pens. Lots more thumbs were created, but I just wanted to give a taste of my new process - ballpoint pencils, brush pen inks, and, later, digital recreation.

Right now I'm doing some illustrations for another fighting fantasy book, this time it's a Call of Cthulhu type of thing. 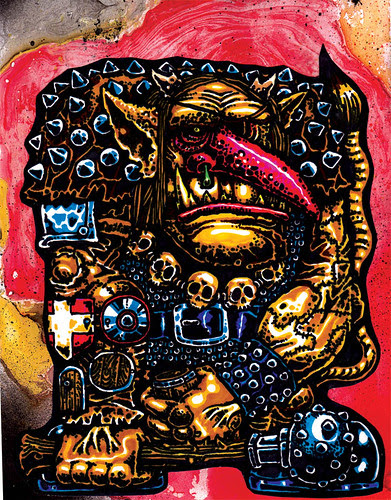 This is some kind of big War Troll, he has makeshift armor made up of shields on his arm there for scale. I've got some ideas about the adaptive nature of Trolls to their environment, this Troll, having spent a considerable amount of time on the battle field no doubt under the command of some sorts of Black Wizards has become more human & sophisticated compared to his forest dwelling brethren. Click on these images by the way, to see larger versions & relish in the detail! Relish!

I just initiated an Artist Coven called the "Black Wizards" featuring artist types who come from the Punk/Heavy Metal scene & have a similar style & nasty attitude. The goal is to promote this particular type of art & the artists & have some group shows & allow us to kick down the door of history & carve our names in the marble. 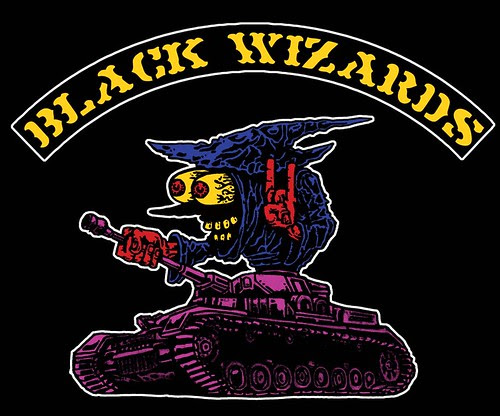 This wouldn't have been possible without the inspiration from John Blanche who showed me that you could be a big, burly, nasty, heavy metal listening, motorcycle riding, beer drinking lout & still be a fantastic & respected artist. Thanks John! 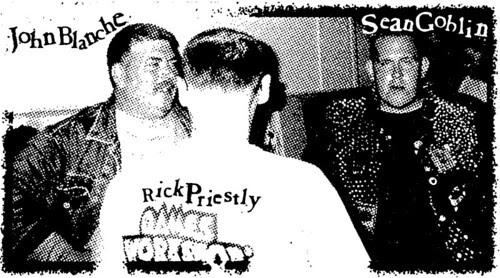 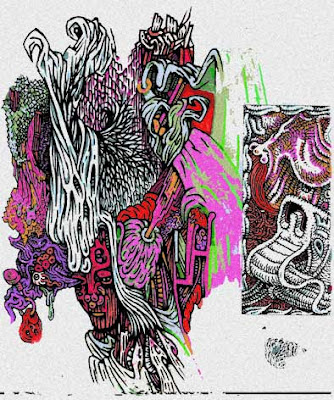 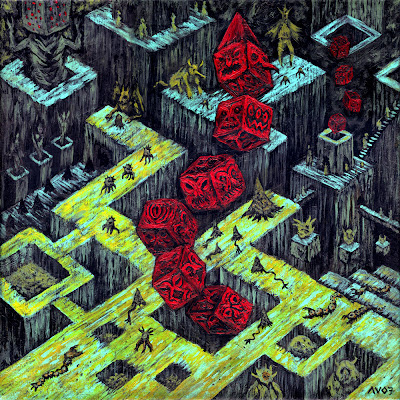 Finished the sucker the other day. It's difficult to translate through this scanned version but the surface of the painting has a great thick textured gritty surface. If you're in the New York area you can check this out in person at the McCaig - Welles Gallery in Brooklyn as part of the Art Dorks Squared show. I've got some other paintings I'm working on in this style, I'll post some of those in the not too distant future.
Posted by Aeron at 6/10/2007 03:48:00 AM 9 comments:

Three more pages of the revised Molluskhead story. As you can see I changed the layout for my latest page and split it up to fit the square-ish format of the book.

And a Kirby panel inked by yours truly, inspired by a TCJ thread about a Flickr challenge. 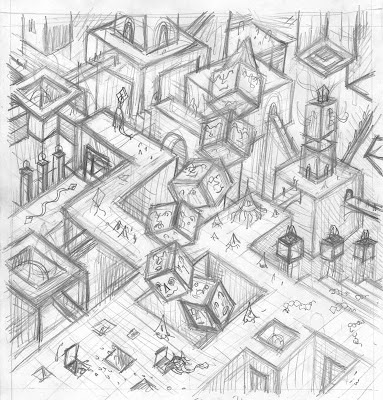 Sketch for a painting I've been working on. I'm going for some kind of weird Gumby/Escher/videogame platformer vibe. 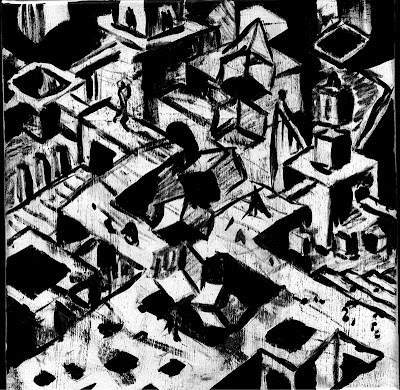 And here's the paint sketch on the canvas. I printed out the pencil sketch to the 12 x 12 inch canvas size and realized my carbon paper was missing. So I got out some charcoal and covered the backside of the print out in the black charcoal. I taped the printed sketch onto the canvas and used a pencil to draw over all the lines of the image. The charcoal on the back of the print pressed onto the canvas and worked about the same as the carbon paper would have, leaving a tracing of the sketch on the canvas surface. Next I grabbed a brush and blocked in some areas with black acrylic paint. The goal for the colors is to make the block totem snake thing in the front a hot red and the background a cool color, probably some dark blues, greens, purples.
Posted by Aeron at 6/04/2007 12:06:00 AM 2 comments: 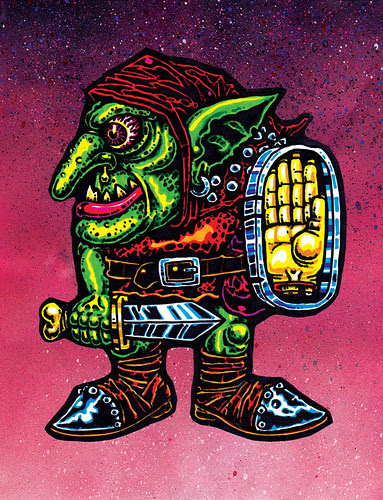 This is another Warhammer related piece, a Slaanesh Chaos Warrior on Frenzied Mount. Absolutely loved the models & paintjobs on these when they came out in 1987 or 1988. Great stuff. Still love it. 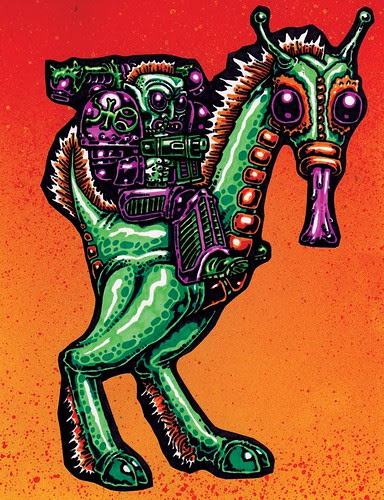 Megadeth are the perfect band to listen to while thinking about Coast to Coast related subjects.
Posted by SEAN at 6/01/2007 05:17:00 PM 4 comments:

Bichromatic for the People

The next "La Maison Qui Pue", the french comic anthology I mentioned in my last post, will be printed solely in two extra colors, so for the last few days I've been trying to figure out how to effectively use this for my story. These are the first three pages out of nine.