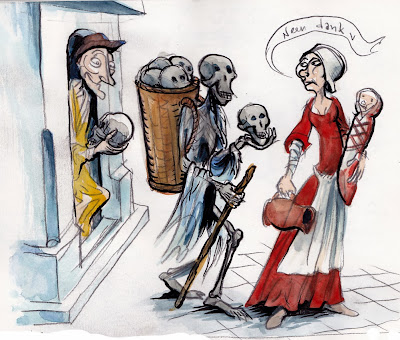 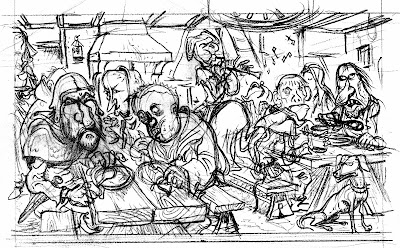 Jheronimus Bosch and friend enter a cosy tavern. From chapter five of my upcoming book.
Posted by Marcel Ruijters at 2/14/2014 07:04:00 AM No comments: 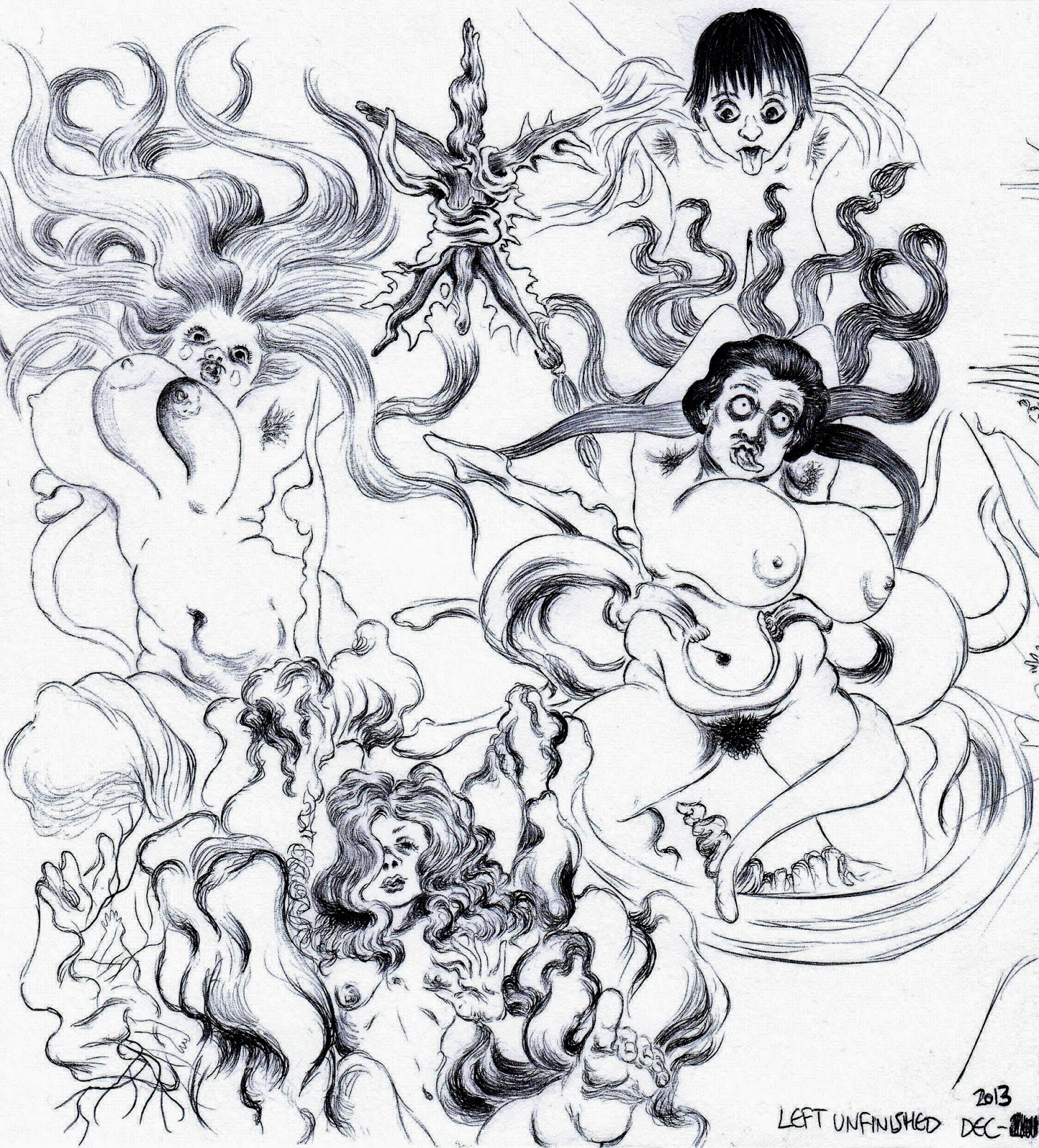 I'm a bit more comfortable with the idea of showing aborted drawings now. I think needing each image to succeed every time probably slowed me down a lot. When you know something isn't working and try to salvage it, it makes things worse. Part of it is that I'm afraid of showing ideas presented in a way that doesn't do them justice. Some might see that part of this image is a variation of an idea from another aborted drawing.
I'm still not sure about showing works in progress. I'm tempted because some of them take a very long time and if something goes wrong (like a fire), I wont have lost all that work if I show them halfway finished. But I really prefer people seeing an image in one go, so it will have more impact. Kind of worried some will think that the finished work is disappointing after the promise of the earlier version.
Most of my favourite artists repeat themselves, they show different variations of a collection of obsessive ideas; but there is always a danger of being just too repetitive and I think even the best artists fall into that. Lots of aborted and half finished drawings in my galleries will possibly make some ideas overfamiliar.

I think some of these worried/cautious tendencies have hurt me. In hoping so much and concentrating so hard that my present ideas work out well, I almost feel like I'm somehow less likely to open myself up to the idea of the next ideas being something much better. Like getting tunnel vision from focusing on certain works too much.
I've talked before about ideas narrowing and hardening too much when I should be opening them up to a sense of infinite possibilities for improvement. I'm finding this very hard to describe properly but I hope this makes some sense.

I've made quite a bit of improvement with my more open minded and flexible approach to creating. Drawing is more fun when you stop caring if you keep having to rub out and redraw something to satisfaction; I don't know why when I was younger I felt I had to get it right in one go, because that makes no sense. Especially when the redrawing is a new idea that is far more exciting than the original.
In the past I would far more often leave some areas of an image being far less accomplished because I wanted it finished so badly; but now I really love making the whole thing better.
The more I see other peoples creations that underwhelm me or I feel like I'm not getting much satisfaction out of life in general, it always reminds me I have the luxury and privilege to create things the way I want them to be and extra work is a small price to pay for creating something to be proud of.
I think the idea of getting things done quickly is probably a problem I got from reading about comic artists and illustrators who were admired for their speed. That kind of professionalism is very understandable in the circumstances of some people. But more than anything I want to do work that makes me happy and fulfils many of the things in life I wished I could find but never did.
I always want to tell younger artists that they don't need this obligation to draw their favourite characters; that they can focus on making their deepest yearnings come true in a certain way; to think about the things you forgot you wanted because you never seen it enough in your own life.
In my case, the type of landscapes/settings I hoped existed, but when they don't actually exist in real life or in images/fiction that I can find, the expectation fades away and I forget about them. So I try to remember all my ridiculously high expectations of life and other peoples creations and put them on paper.
=========================

I'm really worried about global warming and Scottish independence (there is not much evidence it would be very good) and the type of chaos and poverty they could create.
The internet connection at my fathers house (my main base of internet operation) didn't work for over a month. First the weather seemed to kill it, then there was several ridiculous mixups from trying to fix it. After getting an upgrade that was supposed to make things faster than ever, it is presently twice as slow.
I've been seeing lots of amazing artists who draw/paint digitally with a tablet and I'm not sure whether my reservations are about the inherent properties of drawing with a computer tablet or if that is the fault of the artists.

What I'm trying to say here is that I get scared thinking about the incredibly precise circumstances that need to be in place for us to live the way we want. The fragility of the social, political, environmental and technological circumstances is terrifying
I kind of take drawing paper and my art tools for granted, yet it has only been a short time in certain locations that people could take them for granted. Part of my motivation for using the tools I do is because they are cheap and easy to find. I scared of finding great tools that rely on very specific circumstances. Some tools stop getting made. Aside from not liking to draw on a screen, I hate the idea of not being able to draw in a blackout. Could there ever be a time when I cant get lead, ink and paper? If I had to use a tablet, could I get all the same effects?

The image editor on my new computer seems to have bizarrely limited options for resizing; I thought I had gotten used to the new way of adjusting the marking visibility of my art but sometimes it is unexpectedly complex.
Blogger keeps telling me my browser has compatibility problems and so blogger might not work properly but doesn't give much info on what might go wrong, I think I'm safe to ignore it right now.
I feel like I need the internet to be happy now; censorship and faulty connection keeps threatening that.

Some of these are spoiled brat problems but I think some are more serious.
I keep feeling like one day everything is going to horribly screw up and I cant do all the things I feel I need to. 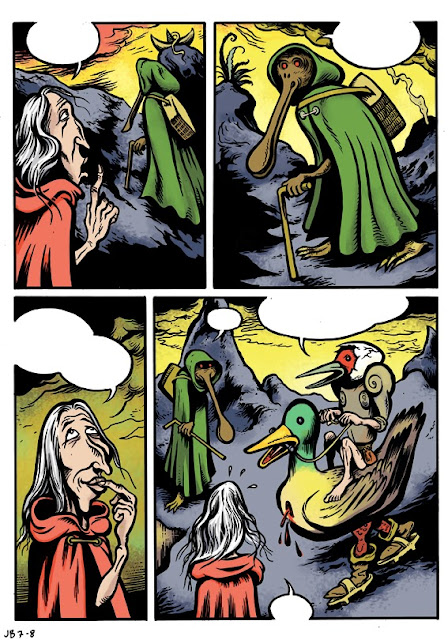 The many demons with bird-like features in Hieronymus Bosch's work refer to folkish proverbs of his time (the spoonbill for instance refers to gossipers, because it is a bird which drags its bill through the mud). But i am now inclined to think that there might be a connection to the creepy masks plague doctors used to wear, a century before he was born. I dhave to research if they were still in use during his life, but the memory of them must have been alive, at least. I imagine a collection of them like in the pic below in storage in a hospital could be of use in one of the still unfinished chapters of my Bosch story. 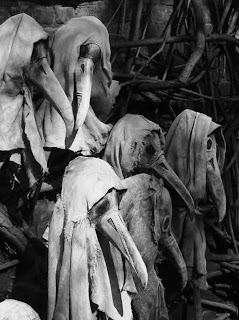 There's few years now that i start doing stuff for publishing out (except my own) and more and more people ask me interesting stuff, but now i can see the borders of my knowledge (and PC limitation, also), so i let Jean-Jacques do the coloring. Really amazed by others stuff, as Fufu showed us few weeks ago...

here link to be part of money tracking for this book : http://fr.ulule.com/couverture-n3/ 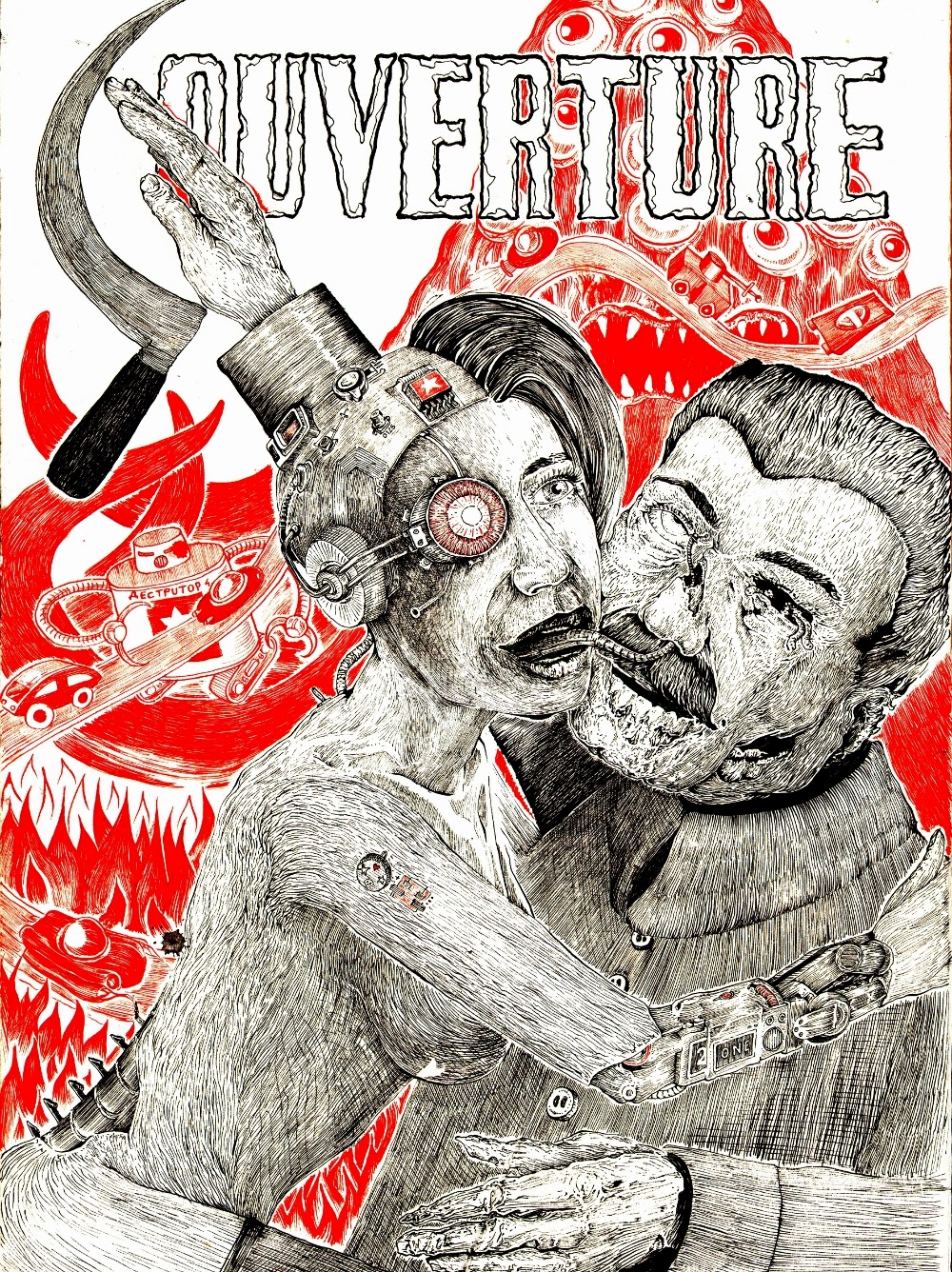 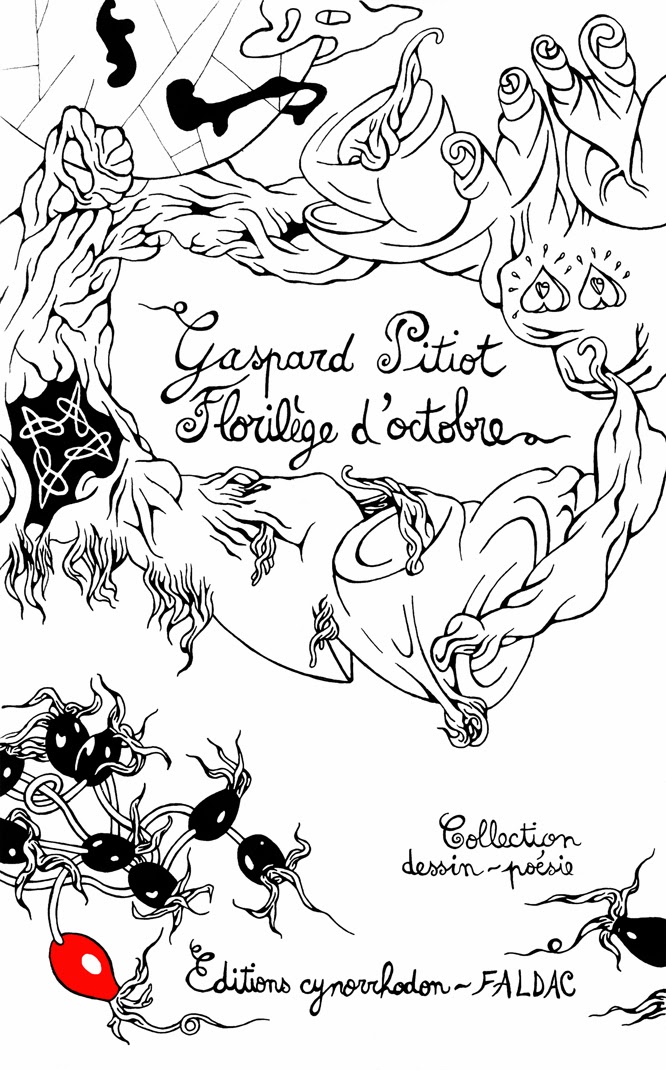 Florilège d'octobre gathers poetries (in French), drawings, comics and paintings of mine… 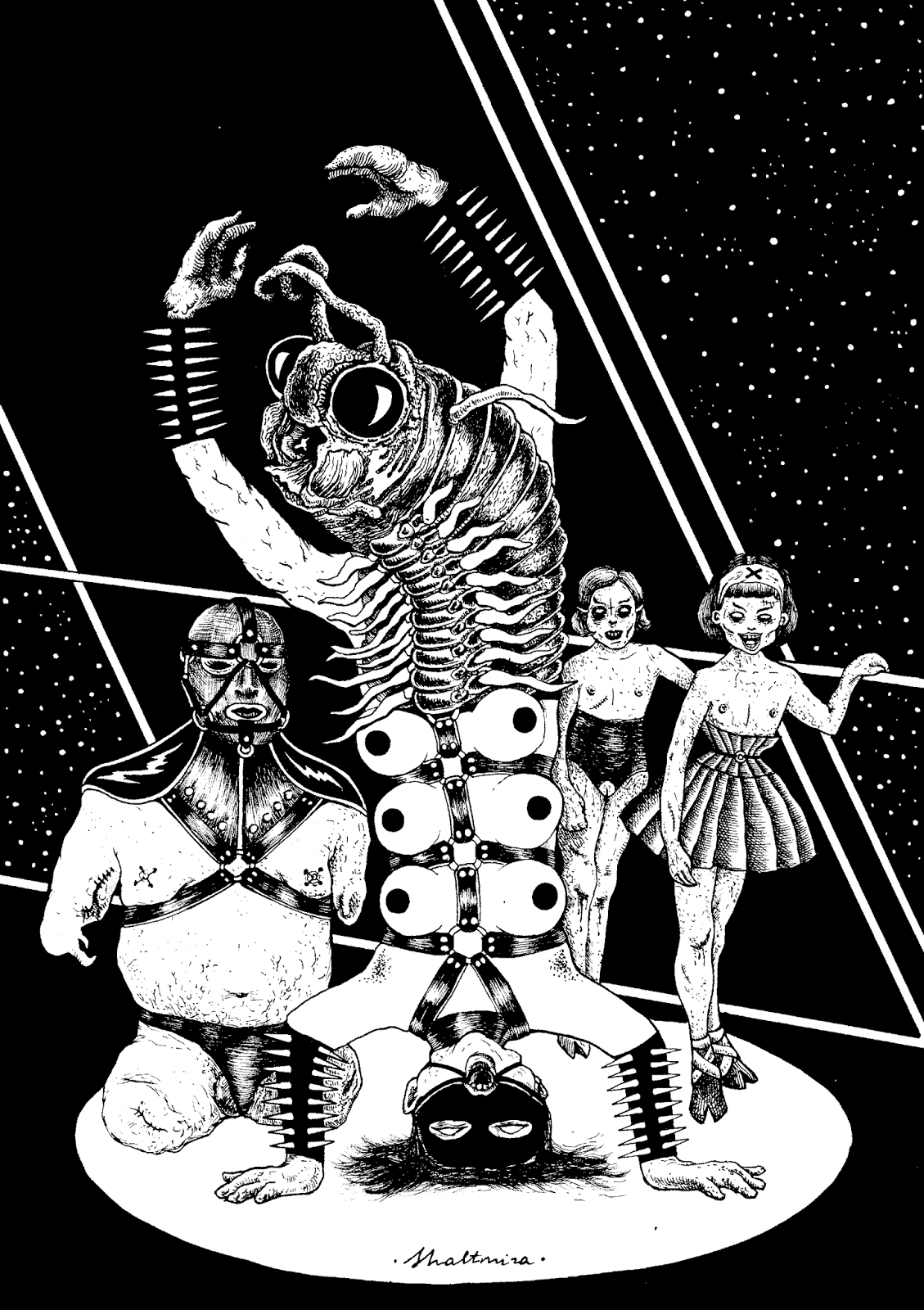 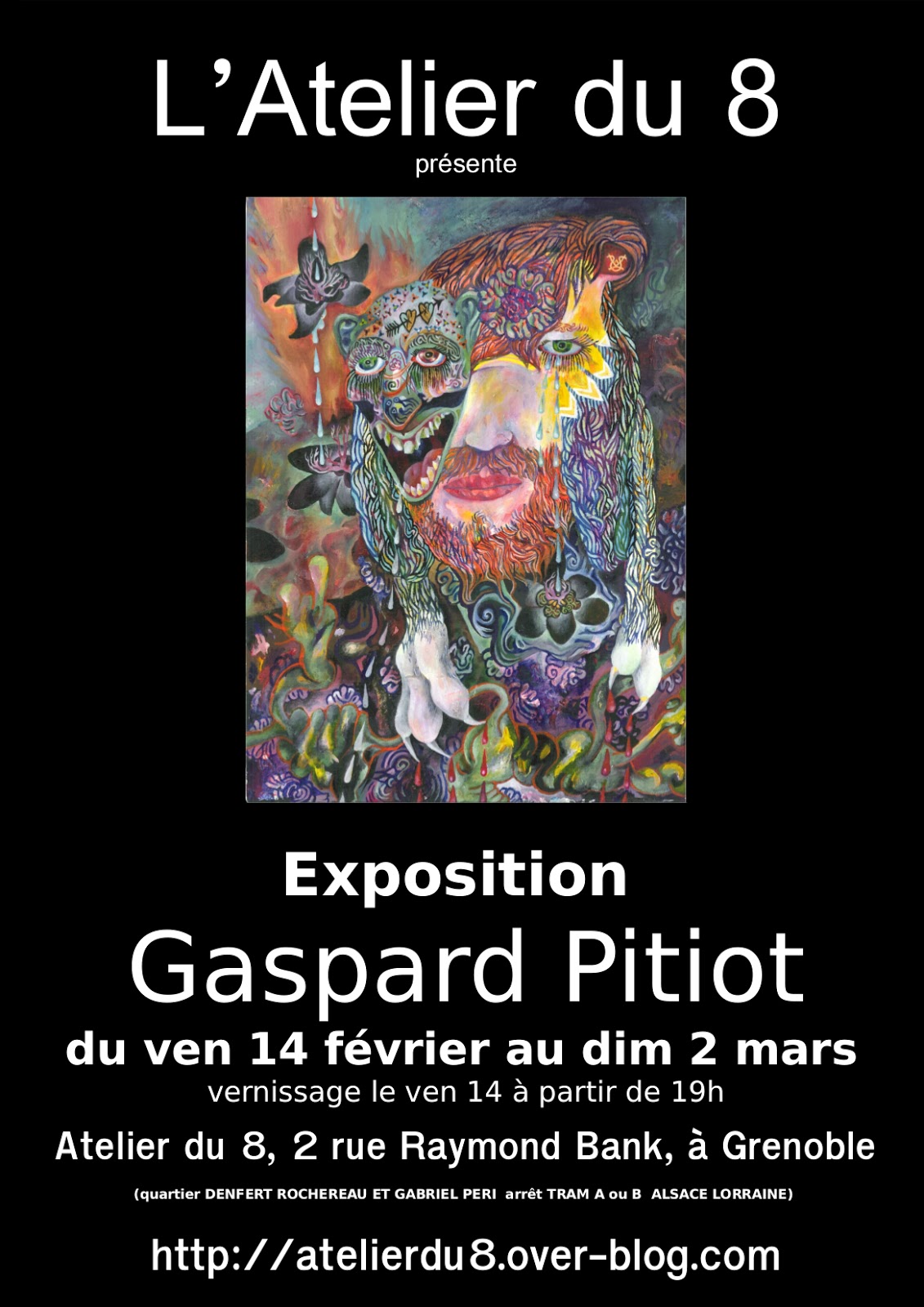