Here's a handful of painting sketches for a series of monster portraits mostly inspired by vintage horror comic characters. I will be fleshing these out in color this week.
Posted by Aeron at 11/29/2009 02:02:00 AM 5 comments:

The Jewel of my comic book collection-"The Stars My Destination" 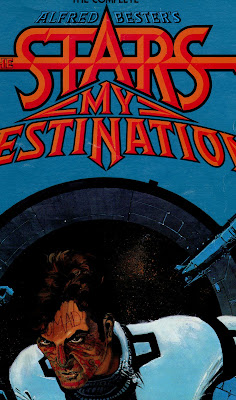 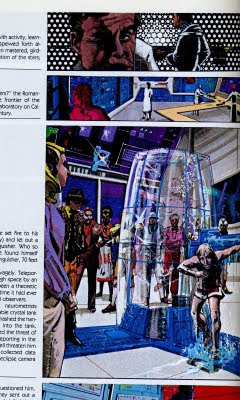 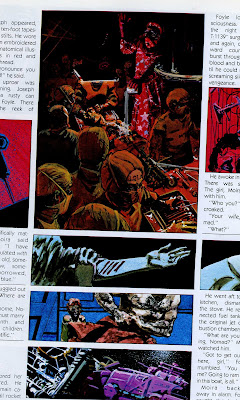 "The Stars My Destination", graphic novel, I believe is a true masterpiece.
I remember when I picked it up in the comic book store (1996) and I had never seen anything like this. The art itself is just fantastic, very much in the style of the '70s, in which the comic was made. It was printed in 1979 originally and was featured in "Heavy Metal" Magazine. The artists used a four-color printing process- which was not used in American comics at that time. Also, there was a use of a computer to obtain certain graphics, which I found was amazing for the time. Anyway i highly recommend it, if you can lay your hands on one. It was reprinted in 1992 by Epic Comics- which is what I own. I haven't seen one since. I have to say recently re-reading this comic and the original book, I feel that if they could only make sci-fi movies like this; the colors, it's so fresh, so different. I guess maybe I'm just exhausted with today's black and white Alien-esque stuff that they are making over and over again. I highly recommend the original book, you can get it on Amazon.
Posted by Unknown at 11/28/2009 09:23:00 PM 2 comments:

Hello, my name is Kurt Komoda. I've been lurking on here for a while. I'm an artist living in New Jersey and working as a commercial artist in New York City- though, it doesn't really pay the rent and bills. I think you all know the story. Like many of you, I grew up as a terrified child, tormented by the things in the dark or just outside my field of view. Most of my nightly phantoms were fueled by the snippets of horror movies I was able to see before my parents would send me off to bed. Unfortunately, they always did this just as the nice movie we were watching turned into something ghastly- so....I be sent upstairs to my room where my imagination would begin to fill in the blanks. In all cases that I've have the chance to check, "my version" was better than the actual movie. I've learned that it sometimes better to keep it that way. 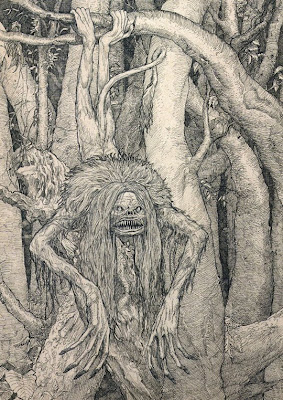 My introduction to Eaten By Ducks was through Robert Gilmour, when he identified one of the drawings I had done of the Nucklavee: 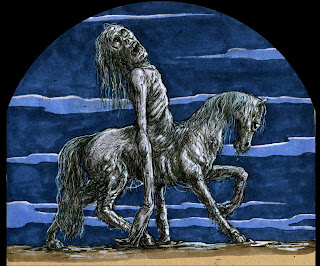 I had read about it somewhere and immediately sketched it, but then forgot what the hell it was. I don't think it's a very good drawing. It was just a silly sketch that, for some reason, I Xeroxed and then colored with marker and white gouache. I hate the human head and the one-eyed horse looks like "My Little Pony" or something. I'll have to draw it again and make it look a bit more sinister. 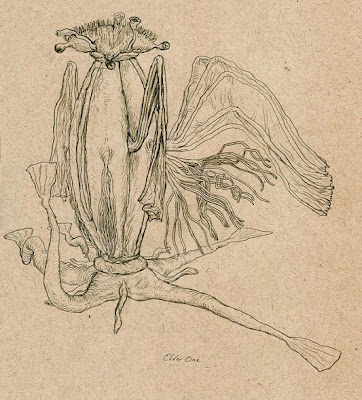 Okay, well, I can't take up too much space. I suppose there will be more as we go on. Obviously, I'm fascinated by monsters- but I draw other things, too. 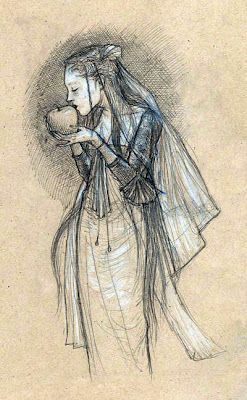 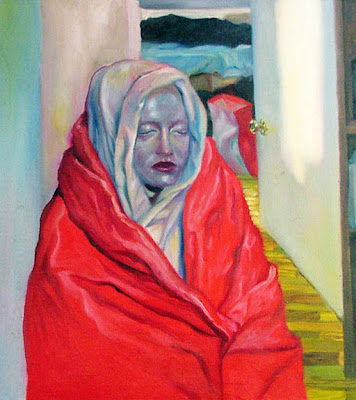 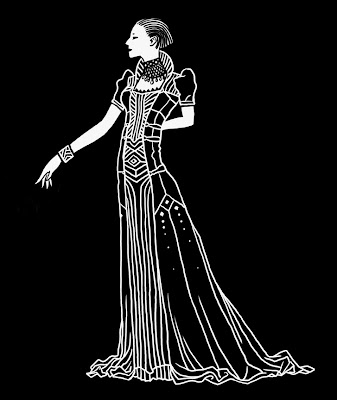 There are two things I remember from english classes in highschool that I really enjoyed. John Steinbeck's Of Mice And Men and an animated version of Macbeth which I never seen the whole of.
Part of the thing that makes them stick in my mind is that I seemed to be one of the few that actually enjoyed them both. I suspect they really did enjoy these things but did not want to admit it because these stories are "good for you",, but I can't really tell. After we watched the animation, everyone was saying "That was so crap", but I think they felt threatened,, not that they were scared, but people always hate something all the more if they think they were supposed to be scared and have to assure everyone that they were not scared.

Here is the Macbeth animation by Nikolai Serebryakov, with a voice by Brian Cox, some incredible faces, but the highlight is easily the shapeshifting withces. Serebryakov also did Othello. I bought Shakespear Animated Tales box set recently and it contains 12 of these animated stories...

Unfortunately, this guy hardly did much animation, but here is the best thing I could find,, not in English, but it is so good you wont even care, great music too...


==========================
====================
I've noticed in a lot of films I have enjoyed lately, they are restrained and dont like to give the audience obvious satisfactions. 13 Tzameti had a moment in it where it could have showed you something, but you didnt need to see it because you knew exactly what happened. The director is doing an american remake with a cast that suggests that the audience probably will want the obvious satisfaction, I'm curious to see what they will do with it. The situation in the story may not reappear, but I'm curious to know how it will be handled.
If you still dont know what I'm talking about, I mean those annoying parts in movies that seem to be in there only to empower the audience, my examples are Relic, Carpenter's The Thing and one of the Alien films. The moments where the hero says "You bitch" or "fuck you" before they kill the monster. I hate these audience empowering moments,, I'd rather the audience felt helpless and hopeless. Perhaps these are from the studio interfering, because it seems to be catering to the people who need to be assured that guns and explosives can overcome any obstacle.
I hope I havent written this before, because I've had it in my head for a year and I feel like I might have written it before.
Posted by Robert Adam Gilmour at 11/27/2009 02:12:00 PM 1 comment: 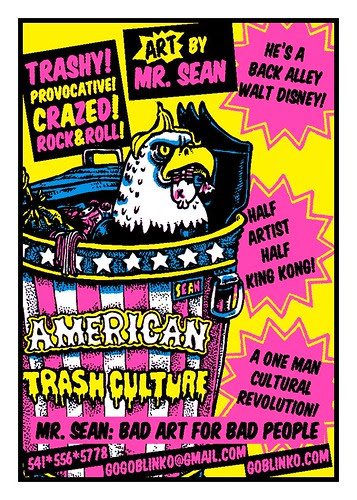 A show flier i did. 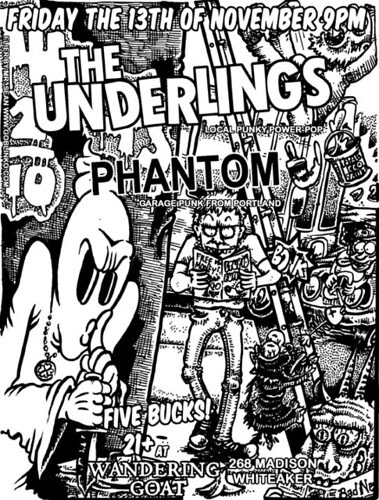 Boy, coming to EBD these days is like descending into an ancient crypt, yet unfortunately not because of the ghouls, zombies and other unnamable horrors lurking here - no, actually because it's really quite dead. The light from my candle illuminates nothing but dust and cobbwebs, and the only noise down here comes from some insect larva wiggling underneath the stone slabs of the floor and an occasional drop of water falling from the ceiling.

Hello-o! Monsters! If you hear me, please come out! It's boring without you!

Anyway, here's a work-in-progress jam comic which Crippa is currently doing with me and several other drawers (around eight or so I believe, Zeke to name but one). Each story starts with the same panel (drawn by Crippa). From then on it goes back and forth between him and every respective artist, so naturally each develops quite differently (at least from what I've seen). Our jam has reached panel 6 now. Here is an in progress portrait of a demon, part of a small series of 4. Portrait inspired by the devil in Albrecht Dürer's Knight, Death and Devil. The edges are obviously still very rough, still working out the shadows, and the snout could probably come down some. Might add a few small horns around the top of the head.

After being on the phone for a while I often find that a drawing has miraculously appeared on some scrap of paper which had been lying around in my vicinity, without me having any recollection of drawing it. If I like it I usually glue it into the sketchbook I'm having at the time. Here's a small collection.