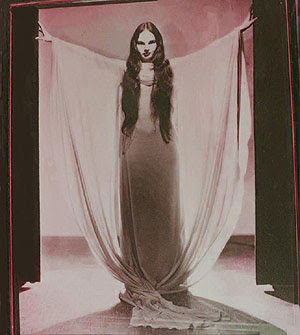 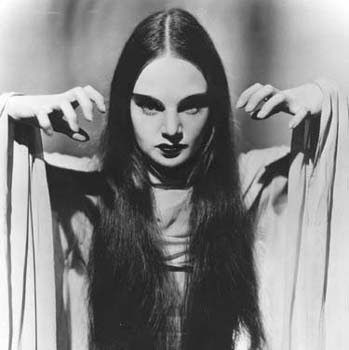 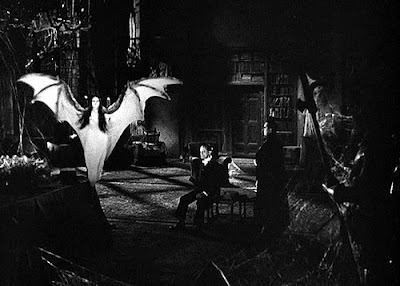 I rate Mark of the Vampire higher than most films of the era, it is not a great film and it is a mess but it has some nice sounds and images in it. Unfortunately a lot of the film was cut,, you can see some intriguing scenes in the trailer that were not in the film. Carroll Borland is the highlight of the movie and if only the movie studios were crazy enough to forget about the story and just devote the screen to her wandering about.
I recently watched a good Shaun Tan interview and I was glad he shared my thinking that you dont need stories shoehorned into a series of compelling images. I'll be happy when there is a group of horror film makers who dont bother with stories and just film a series of scary incidents, or a series of lovely images.
You know I've always believed that every comic artist should have their own comic where they can go crazy with any order or mixture of pinups, text, comics and sequences. Some people just dont have enough stories to go with the images, so they shouldnt have to force it out. 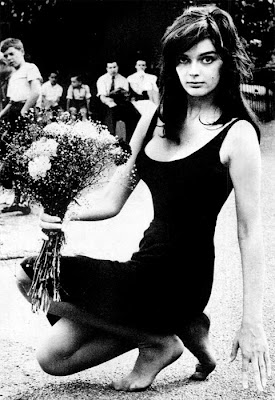 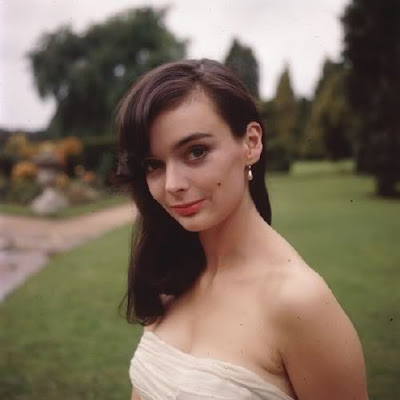 
When I first saw La Chiesa/The Church by Soavi/Argento, I was very disappointed, but the soundtrack mostly by Keith Emerson stuck out. But even better was a piece by Philip Glass which was one of the most incredible things I've ever heard.
The real version of "Floe" is on Glassworks, in a very different, much less gothic version. Other this this piece I dont really know anything else about Philip Glass, but this piece is enormously encouraging. It takes up the first 9 minutes of this video and it will make your mind go wild with fast moving grandeur imagery. 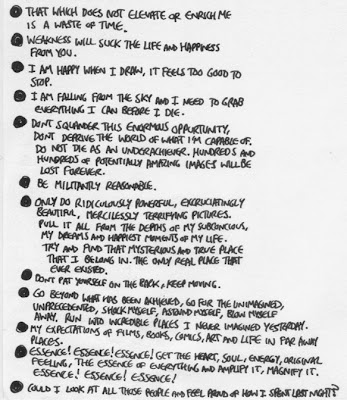 These are my 12 commandments, I have this sheet next to my bed and I read it before I go to sleep and when I wake up. It may sound pompous but I think they are effective and I believe in aiming high.
Posted by Robert Adam Gilmour at 10/31/2009 09:02:00 AM 2 comments: 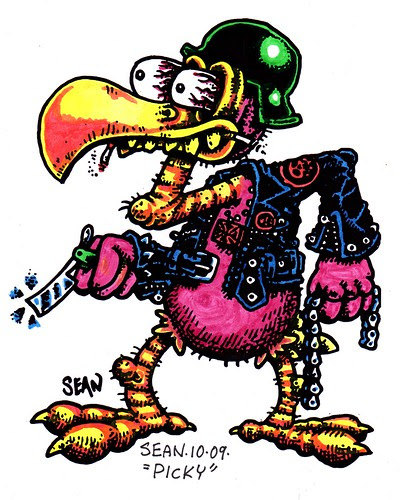 Picky the Vulture. Probably a member of the "Road Vultures". 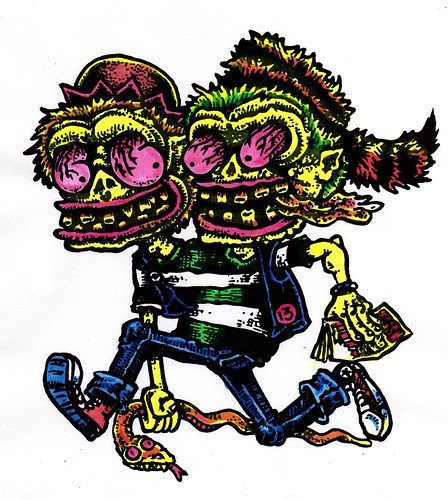 Are you there God? It's me, Tommy & Louie. Who put the snake in snake brandy? Who invented the Groucho Marx glasses? Did the Scottish make the first whoopee cushion? Why do they hate cars so much?
Posted by SEAN at 10/24/2009 08:43:00 AM No comments: It's been a while since I've drawn anything worth posting, and it's also been a while since I've posted. Life got ahead of me recently and my fantasies of controlling time have shown themselves to be empty.
This drawings is done by doing a line drawing on paper, then flipping the paper over and filling in the negative areas by hand. I could certainly do this with photoshop, but it does not make a finished piece and lacks the hand-drawn feeling I strive for.
A second NSFW image appears in this post on my blog.
Image copyright 2009 Chad Vercus
Posted by Chad Verrill at 10/24/2009 06:50:00 AM 3 comments: So, I finally had the time to ink the half-finished Spacenite 2 contribution which has been lying around on my desk for weeks now. Voilà! 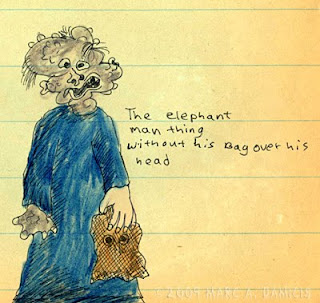 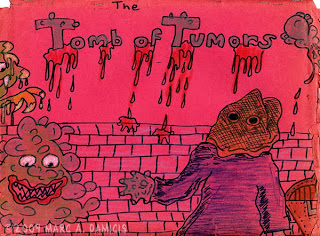 I know there’s an Elephant Man admirer or two here so I thought I’d post this. After seeing the film on cable TV in 1981 or 82, I became obsessed with it…for whatever reason…And I went nuts making a number o grotesque Elephant Man drawings colored with crayons. This one item I made, a crude construction paper booklet called “Tomb of Tumors”, which was inspired by a D & D module called “Tomb of Horrors.” Also: This D&D book, was also one of my favorites, and had a shitload of really cool b&w Trampier art…
Posted by pickledpunk at 10/15/2009 03:54:00 PM 6 comments: 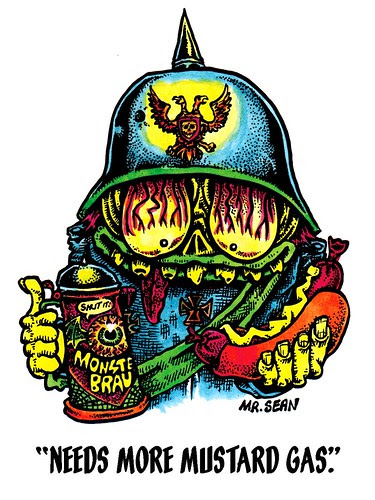 Kaiser Roll says, "Needs More Mustard Gas."
Novelty Greeting Cards featuring Mr. Sean's Monsters, Weirdos & Creeps, Gurpers & Cretins.
I've been listening to the radio shows on Garagepunk.com lately, great stuff. We watched Billy the Kid Vs. Dracula (1966) last night. The movie is conceptual gold, classic monsters in the old west! I'm starting to wonder what i want out of movies, i tend to draw while "watching" them & so i actually find movies that require lots of involvement to be obnoxious. So, these old B-movies are perfect, because they tend not to make much sense anyway & can have some inspired imagery in them & they're usually just an hour long. I like whoopee cushions & the Ramones for the same reason.
Posted by SEAN at 10/15/2009 10:16:00 AM 4 comments:

more scarier for you

The Witch, Demon and Werewolf 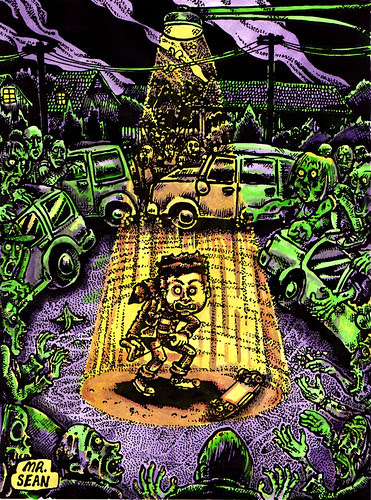 Speaking of Eaten By Ducks, i found a Max undt Moritz book at an estate sale for a quarter the other day. I've been too busy to read it, but i was quite stoked to find it. I also started up my button manufacturing as my central form of income in september (as opposed to teaching) & it has been going fantastically. If any of you are looking to have buttons made for projects, let me know. I'll have a site up with details in the near future.
Posted by SEAN at 10/13/2009 09:42:00 AM 1 comment: I'm doing a short series of paintings inspired by old Halloween masks, in these you can see crude collage combinations of a variety of masks fitting into each theme, werewolf, the ghoul, the witch/vampire and demon. In the bottom black and white picture you can see changes in the werewolf to the color version. I ran some sketch stamp filters over the pictures to maintain that thick black cartoon linework that will be important to keep these looking more like flat Halloween mask interpretations and prevent me from taking them into a more sculptural, physically real direction. I'll be painting these this week, should be a lot of fun.
Posted by Aeron at 10/11/2009 11:38:00 AM 5 comments: 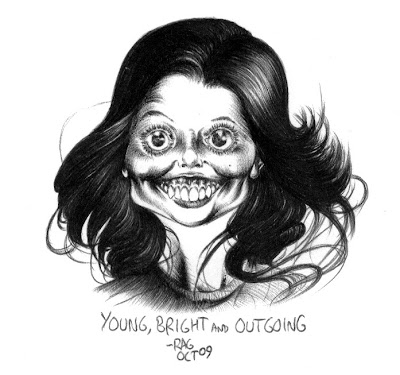 The Body Baroque and the writings of Jeff VanderMeer I was reading a fascinating article on an architect named Yousef Al-Mehdari who has ideas about a unique style in architecture using the patterns of human movement.

"Al-Mehdari suggests that a careful – even mathematically exact – study of human bodily movement could serve as a basis for generating new types of architectural form."

The full article can be seen here.

An exhibit of Yousef's works is on display this month in London, details here.

A quote in the article referencing this architectural style from a novel by Jeff VanderMeer really struck my interest..

"Where the sculptures of saints would have been set into the walls, there were instead bodies laid into clear capsules, the white, white skin glistening in the light – row upon row of bodies in the walls, the proliferation of walls. The columns, which rose and arched in bunches of five or six together, were not true columns, but instead highways for blood and other substances: giant red, green, blue, and clear tubes that coursed through the cathedral like arteries. Above, shot through with track lighting from behind, what at first resembled stained-glass windows showing some abstract scene were revealed as clear glass within which organs had been stored: yellow livers, red hearts, pale arms, white eyeballs, rosaries of nerves disembodied from their host."

"In his masterful first novel, VanderMeer (City of Saints & Madmen) sets a dark, phantasmagoric tale in and beneath a decadent, far-future city where Living Artists craft monstrous works of biological art and genetically enhanced meerkats plot to make humanity obsolete. The story is told from three viewpoints, that of Nicholas, a Living Artist not quite talented enough to succeed; his more pragmatic, vat-grown twin sister, Nicola; and her former lover, the unsavory Shadrach, who has survived a childhood lived in the dangerous levels beneath the city and now operates above ground as an agent for Quin, the world's greatest Living Artist and the perverted master of much that is evil within the city of Veniss. When Nicholas's apartment is robbed and the tools of his trade are stolen, he goes to Shadrach and begs an introduction to Quin, hoping to find employment and resurrect his near moribund career. Alas, he fails to follow Shadrach's directions and soon disappears beneath the city, where he undergoes a wonder-filled journey that echoes Dante's Divine Comedy, the myth of Orpheus and Eurydice and the landscapes of Hieronymus Bosch, while also paying homage to the work of such genre masters as Cordwainer Smith and Edward Whittemore. VanderMeer's eye for just the right gruesome detail brings his nightmarish landscapes and bizarre, partially human creatures alive in astonishing profusion. Not for the faint of heart, the story packs a strong emotional wallop." 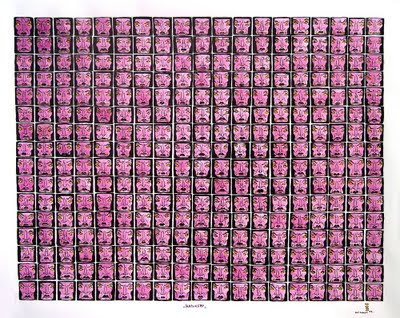 This is a followup to an ink I did about 2 years ago. The difference between this and the older one is that the other ink was done more free-handed, in terms of the faces. While in this one, I used four initial faces and traced those, copying them over and over again. Most of the time coming in and retouching the transfer anyway, beginning from the right side of the ink. Which is kind of interesting, the process made me think of "ascendancy" and genetics. I've decided that for the next one I'm going to pick the "best" face and just use it throughout the entire ink. I think that would possibly be for the better, since I'm not quite that happy with this result.
Posted by Unknown at 10/06/2009 06:20:00 PM 2 comments: 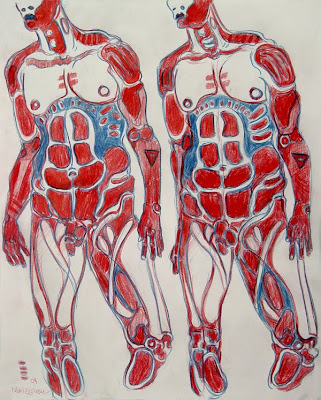 I just got out of the hospital after almost 2 weeks of being there, for pancreatitis. Among sketches of the medical equipment, this is one drawing that I made.