Some more from that new series of drawings... 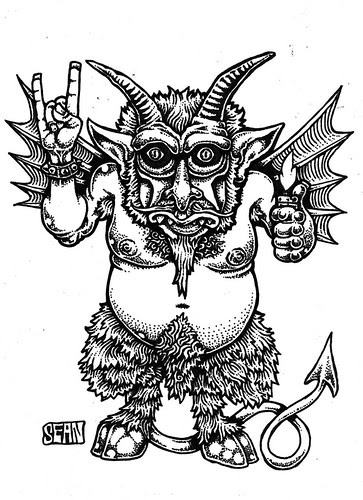 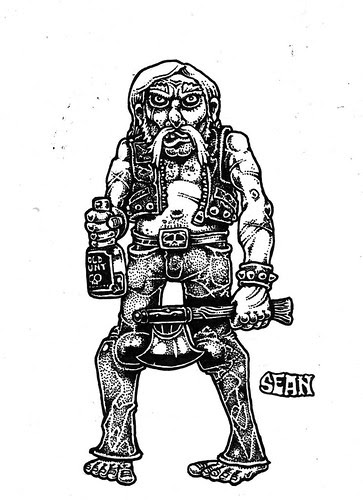 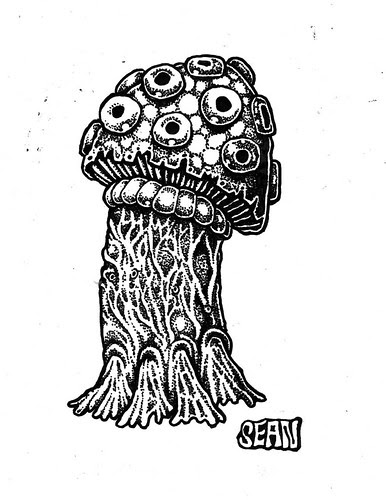 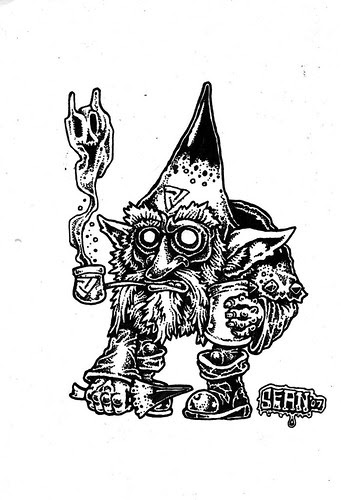 This video is the first in a two part series showing me pencil, ink, and color a zombie's hand. By the end of this video you'll see the piece progress from pencils, to inks, to sketchy value work (in preparation for the spot color added in the next video).

I go to a monthly artist meetup at the Blick Art Store in Wheaton, IL. On my second visit, this past weekend, I was graciously given a free Moleskine and assorted other supplies by the owner, and a talented bloke in his own right, Kevin.

Now, it's pretty common knowledge that I draw digitally. I've done a scant amount of traditional work, mostly relegated to doodles with ballpoint pens and the like. Going to this forum and talking with guys like Alex Wald, Dave Dorman, and Charlie Athanas had me curious, though. Might I be missing out on a lot?

So, I was really happy to get the little package of goodies from Kevin. It left me no excuse to avoid something new (I'd often balked at the $10+ price of Moleskines in the past - but have no problem saving up for a new Cintiq, heh!). I went about making a sketch or two with a 5mm mechanical pencil, but decided that I wanted to try for lots of value changes, and I suspect that wasn't the right tool for the job.

I stopped back into the store a few days later, and Kevin fielded some painfully stupid questions. "What's a 2H pencil and why do I want it?," probably was the worst. He directed me to a few things, I bought a couple pencils, and continued home, the pencils burning a hole in my pocket for the next hour and half of driving.

These images are the first attempts with graphite or, really, any traditional value work. Only a few minutes a piece, half mechanical pencil, half 2H regular (regular?) pencil.

The Moleskine's paper quality was really great. I even got one with predetermined panels for storyboarding/comic roughs. I was a bit trepidatious to jump into traditional work (I'm so back asswards), but I'm really glad I gave it a go. It's exciting to get to draw everywhere I go, and I can't afford a portable tablet laptop while saving for the Cintiq, so this fits that niche nicely.

Is it wrong that the prevailing thought while working with pencil was, "This works just like the pressure sensitive, flat variant of the pencil tool in Painter!" heh?

So fellas many apologies for having been away from this place for so long. It never looks like a lot when you've got them in your hands but I've been trying to finish three books before I go away:
http://bonehousebooks.co.uk/shop.html
And on top of that I just held an exhibition at the Art-Holes favourite London hangout of Brick Lane as a kind of book launch and going away event:
http://flickr.com/photos/mr_boobytrap
Posted by Jon Chandler at 9/17/2007 03:32:00 PM 10 comments:

I do not consider myself an artist, i'm an illustrator of my own ideas. The ideas are intended for intrusion into reality in some way or another. Ultimately, i'm an aspiring city state ruler, i used to be interested in global domination, but i think the smaller, more homogeneous population allows for more exciting, stranger cultural explorations. If you rule the world, you have to contend with every kind of person, if it's just a city state, you've got less to manage. Anyhow, i got my start with all this designing worlds for old fashioned pen & paper role playing games. The guys who did the art for the old Dungeons & Dragons & Games Workshop products were my first inspirations as an artist, & remain my principal inspirations. Their styles are generally unpolished & obviously home-grown, not directed by the theoretical trappings of art school or the high-art world. I like old Punk Rock & Heavy Metal art for the same reason. So, my latest series of black & white drawings go straight back to those foundations. I've got a show of stuff i've done for the last year or so, along with work from my wife & Goblinko partner Katie at the Museum of Unfine Art, here in Eugene, Oregon. 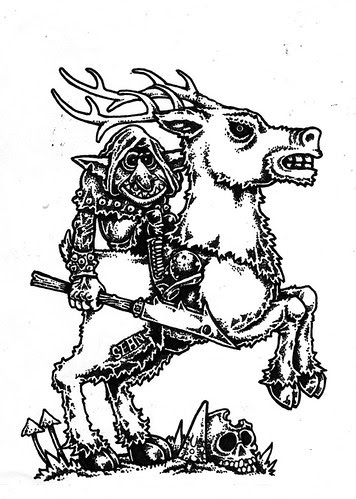 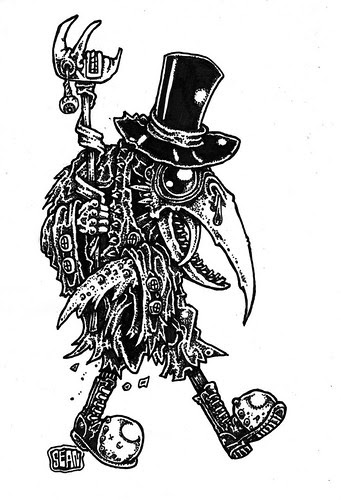 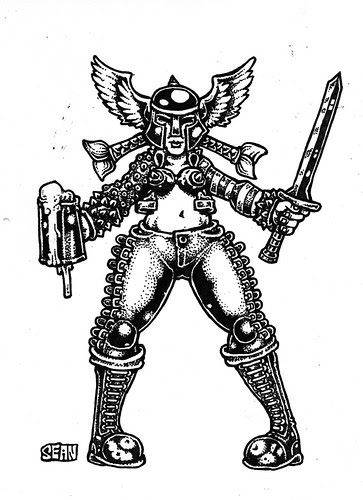 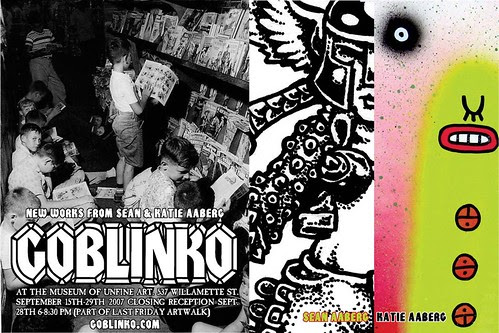 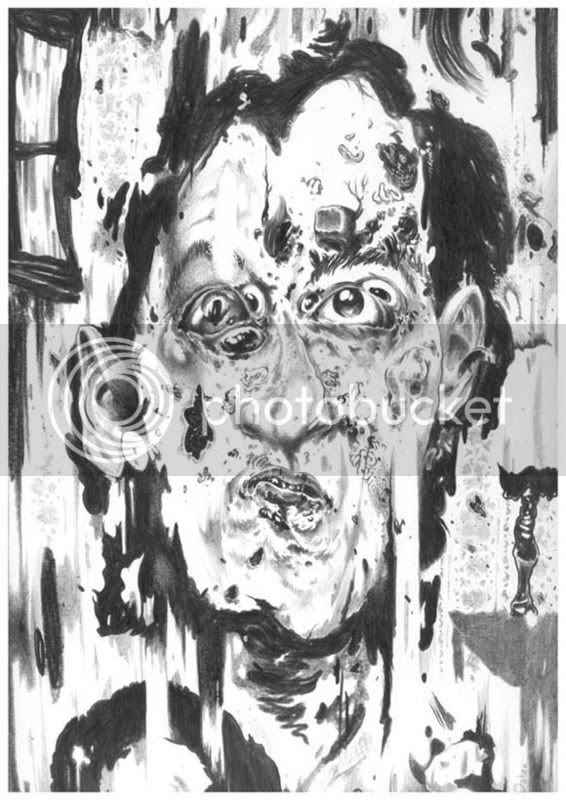 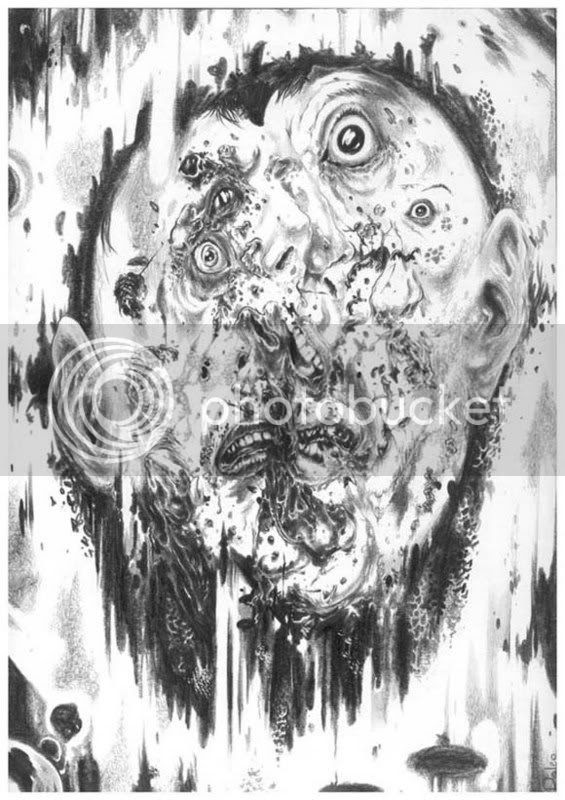 First two of five drawings i'm contributing to the Maison d'Ailleurs Lovecraft show, the quote all drawings illustrate ( in a loose sequence ) is #42:" Fear of mirrors-memory of dream in which scene is altered and climax is hideous surprise at seeing oneself in the water or a mirror. (Identity?) [Outsider?]" 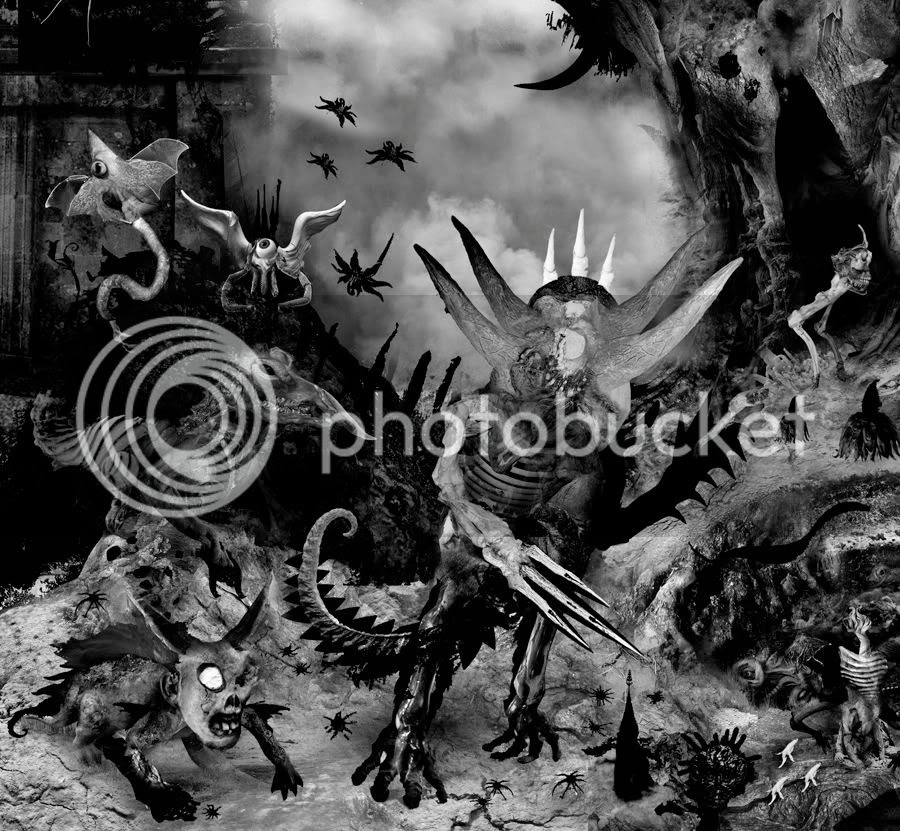 Here's a small fragment from my contribution to the Lovecraft exhibit Fufu previously mentioned. This bit is taken from the lower left corner of the center panel. The full triptych will be on display in printed form this Halloween at the Maison d'Ailleurs in Switzerland and the center panel will be published in the art catalogue for the Lovecraft show coming out around the time of the exhibit. I'm still working out how I'm going to do it but I will be selling prints of this triptych at a later date.
Posted by Aeron at 9/06/2007 03:20:00 PM 5 comments:

Boy, things have been going awfully slow on our Blog, haven't they. I for my part was really busy with moving, renovating, and last but not least I did a short 5-page comic for the Lovecraft exposition in Switzerland, which I believe Aeron and Noah are also participating in. The comic kind of ties into my Molluskhead chronology, and I've based each page on one entry from the "Commonplace Book" (which is basically the concept of the expo), but the book itself also plays a part in the story.
Here are the first two pages: