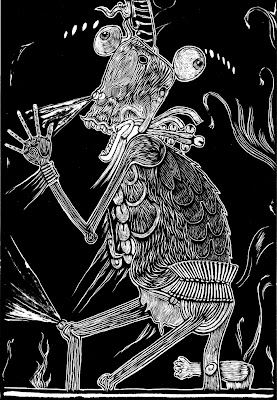 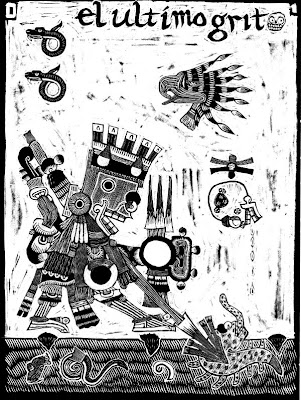 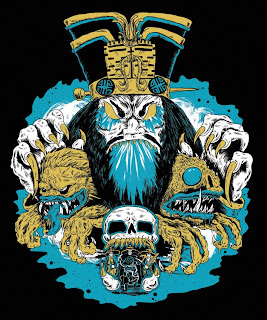 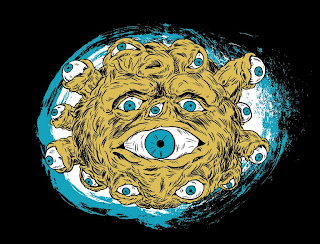 Spare ribs of the Long Pig 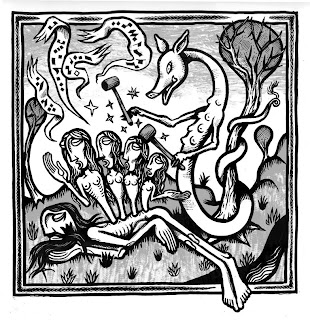 It wasn't until the late Middle Ages when scientists started performing autopsies, that the wide-spread belief of men having one rib less than women was definitely debunked.

MY GOD IS A THROMMING GOD

Image number 7 in the ten print Prospectus Series (as is building on my homepage). this still has a some minor cleanup and detailing work to do, but for the sake of on-screen viewing it is as it should be. 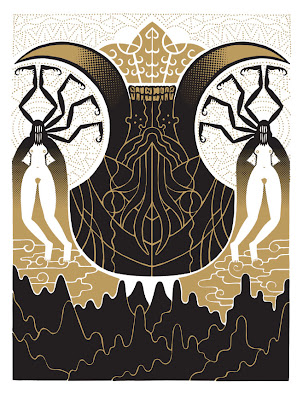 I like it just as well flipped. What appears like a demon head in the upright image is actually more similar to an elephant skull in shape and design. Ok, so last time I promised I'd post a comparison of the new and old versions of my latest comic. The original version was done in 1998 and basically was my first attempt at digital painting. I dind't really know what I was doing and it took me ages; I used some photos as reference and for the backgrounds.
The story was based on a dream I had which gave me the initial idea for the whole Ray Murphy storyline. 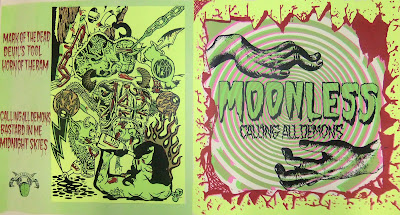 Me and Crippa Almqvist did this cover for danish Doom/Stoner band MOONLESS...
Super limited silkscreenprinted tour edition, catch them now in europe
Posted by ZVEN BALSLEV at 8/26/2011 12:19:00 AM 7 comments:

For this second post I show you my very first serious work with engraving, and specially linoleum. It was in 2008, for a show we had there about End of the World.
I need to say, if I started painting at the beginning of 1990', participating to exhibition for some years & drawing since I'm really young (like you I guess) I also spent 10 years learning my job and managing a professionnal studio. So there's only 4 years now that I re-do art for public show or publication, starting again with "my own style quest" with new technics.
Then I discovered linoleum like a beginner & when I was looking for woodcut, so I've done these first ones imitating old woodcuts, printing them on old paper from 16-17th c. I love doing imitation, detournements, playing with public perception & so on... but I prefer actually doing prints by my own style...
So, this is done after The Four Zoas, which are 4 symbolic entities found in hermetical sciences, & also used by William Blake as you could read there http://en.wikipedia.org/wiki/Vala,_or_The_Four_Zoas

I used another definition of these Zoas which is something like : these 4 entities are the four principles who hide the real world, they're together ADAM (the Earth), physical reality which is hiding metaphysical reality to us... well, something like that ! For me that was a good occasion to show how peoples could be investigate by a very high opinion of themselves just because they do have this official meaning by the way of institutionnal labels. Simple example is someone who's looking at you like a worm because he sold a painting to the instituiton, which painting is hidden into a stadium watercloset, but no way, he is An Artist while you're just a simple human being... Same thing about "real musicians" & "artists" promoted by television and other media... 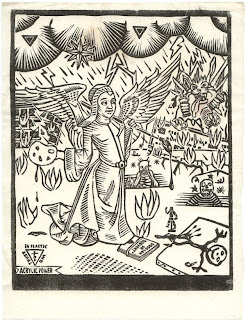 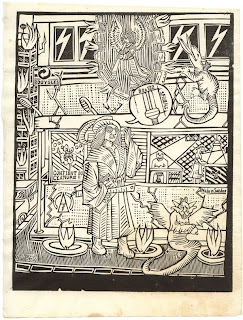 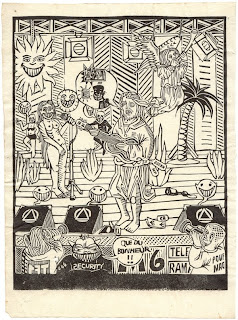 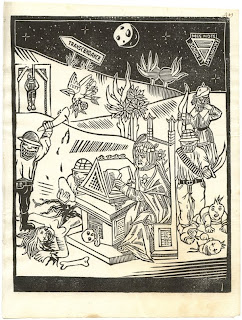 I've done this using different pieces of original woodcuts, spending lot of time to imitate frames etc. Original print is on old paper with sepia like ink, accompagnied by a gothic text and a drawing made after a famous Dürer print 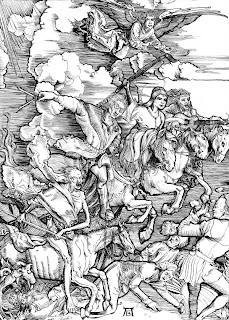 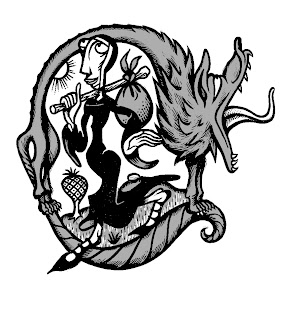 Just experimenting with 'colouring' my art with a single layer of grey. This piece is a 'medaillon'-shape introductory thing (like the elaborate initials in medieval manuscripts) to one of the saint's stories that I have been doing the last few months. For me, this is a local saint. Of course I have been spicing up the classic stories. The wolf was entirely my idea.
Anyway, I used to be quite addicted to working with zip-a-tone in the analogue era as I would have liked to have my stuff published in full colour, but could not. Too damn expensive. So that became an alternative to colour. Now anything is possible, but I'd like to try a minimal approach for clarity's sake. 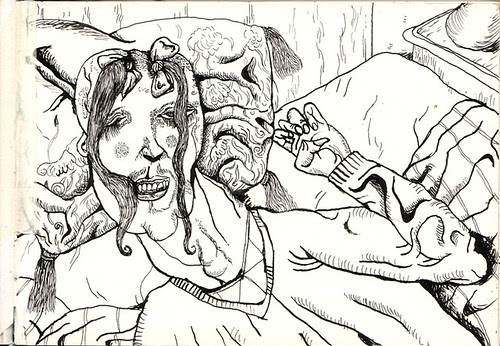 Hello, all! Lately, I've gotten back into recreating some old drawings that I did as a child. On the left, a drawing from 1974 of a horned monster attacking two buildings, some army men, and....a dump truck, a bulldozer, and a cement mixer. I'm pretty sure that the horned monster was my take on Gomora, from Ultraman. Anyway, on the right is a version I did today. Because of the strange inconsistencies in scale and perspective in the original, I had considered doing this piece as a medeival illumination or Dürer woodcut. 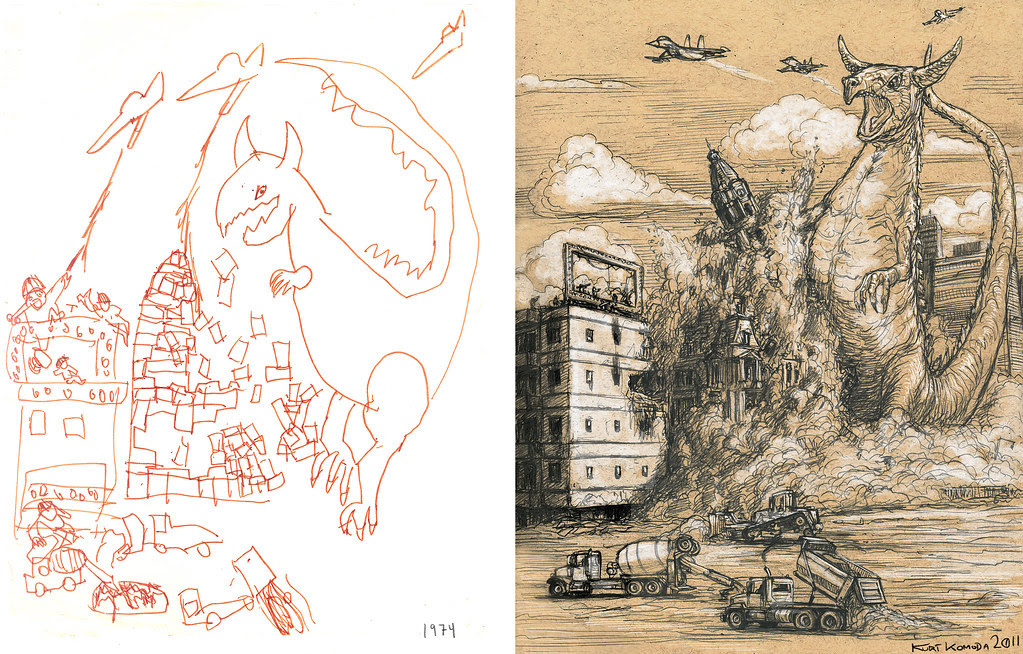 Part of the 2011 Prospektus. First completed state. I still need to add veins of gold to the stone structure. I hope it won't take away from the design/structural integrity but it relates to the gold used to construct the castle and references the material engagement of man and how he uses the materials for his own lofty means ignoring the effects on the frailty of the surrounding nature.

For years I have fantasized a vectorized drawing system that could be added into my handmade drawings that was built of pre-existing parts. Like a side-scrolling video game or Lego it can be quickly edited, copied, rotated, added to, and scaled to fit in with anything upon which I am working. I finally turned that fantasy into a real system and found it quite satisfactory to build a castle with it to add to the hand-drawn portion of this piece, from which I believe it does no detract but only compliments. 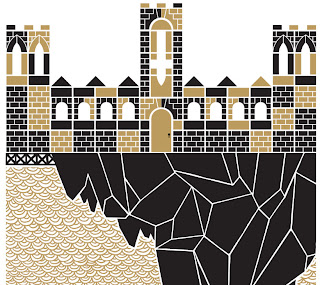 Here are a few panels of a new ray Murphy story that I've been working on lately. It's actually an extended remake of the very first one I did about this character. I decided to redo it because I want to make it work with the rest of the stories and there was a huge difference in style. It's also more than twice as long now and contains a bit more information about what (RM thinks) is going on. I'll post more of it soon, perhaps along with some of the old story.
This new version will be published in the Netherlands in PULPMAN #12. 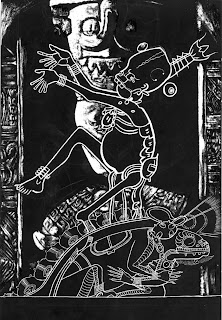 Hi there! I'm glad to be part of this excellent blog, I was looking for a place where we could have discussion about art instead of just posting dumb pictures...

Start publishing today with last project I done for Le dernier cri's Mexico book. I just started doing scratchboard some months ago, using a scalpel (bistouri), then a round blade instead of usual cutter, this give me special shapes. So I can work lines but also something like a photographic fuzzy style.

Drawings there are mainly just real stuff, copied from old maya's drawings and old photos from statues... I just try to do it with my own hand, plus adding some details to complete. Though these original drawings are incredibly modern & perfectly managed by the artists (ref. is "Maya Iconography" Princeton Press). I'll post some more later. 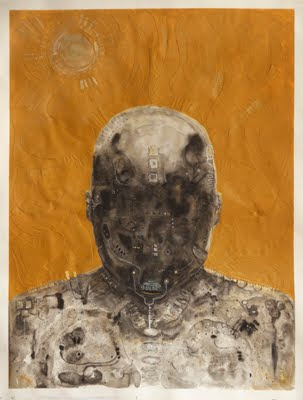 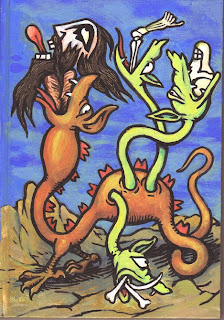 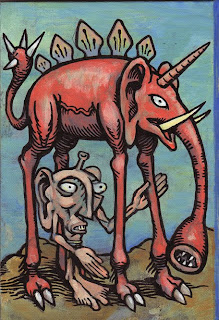 Yet another sketchbook cover, painted front and rear with acrylics. Somehow, the front cover usually does not come out as naturally. I don't paint much so my technique gets a bit rusty.
Anyway, I can't keep myself from putting corpse-painted feral men through a lot of torture. Here is one being eaten by a giant viper pregnant with three little ones eating their way out (which was the medieval way of birth).
The elephant was thought of as a exemplary animal as it would not mate unless forced to. This is a cloven-hoofed evil variety however, protecting a Blemmyan.
Posted by Marcel Ruijters at 8/06/2011 01:46:00 PM 4 comments: 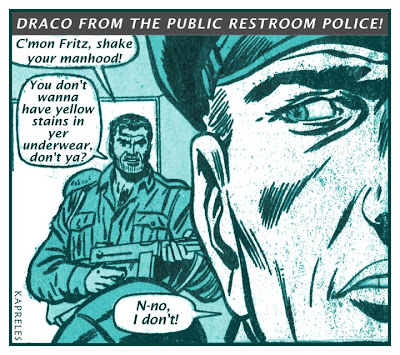 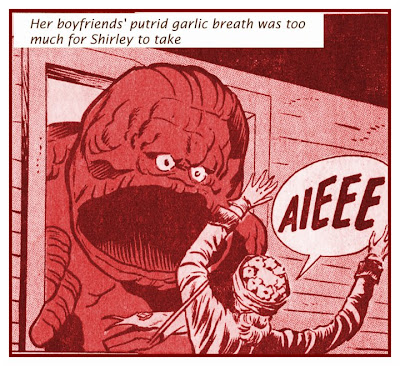 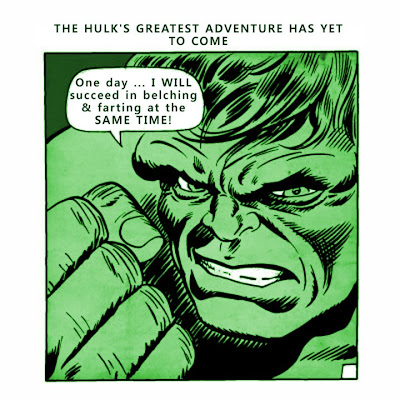 I'm sorry for not posting for so long. In the beginning of this summer I moved in London, was difficult at first, I was really busy searching for job and so on. But I still manage to find time to draw. Here's one of my drawings, my co-worker asked to draw into his sketch book. So I did. It's like the preview of the heavy thoughts going around in my head lately. I'm planning to go back in Lithuania in autumn and I have some ideas about what I would like to do. One of them is that I want to make the wicked art zine and I'm interested if anyone would like to participate in this project? If you have some thoughts - write in comments or shaltmira@terror.lt
Posted by Unknown at 8/02/2011 05:30:00 PM 5 comments: 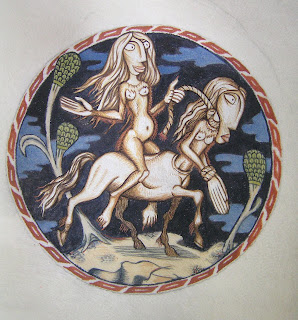 Another medieval post from me, and it has nothing to do with Black Metal or any other kind of music. (Well, the Mediaeval Baebes perhaps)

Fufu might recognize this one as a remix of a page that I did for his Silent Anthology which is still being compiled. My good friend Romuald Sourisse in France is working on a series of these drawings for a show which we will have in September. Click the 'parchment' tag to see another sample, or go here for a good look at the process of medieval illumination:
http://librarii.org/spip.php?article46
Posted by Marcel Ruijters at 8/02/2011 06:22:00 AM 5 comments: