Last weekend I spent in Lille, in the North of France (almost Belgium, and that is how it looks and feels over there) for the exhibition "Across Charles Burns" in the "La Secu" gallery. The place is a non-profit organisation and quite sympatico. The whole deal was set up by this big lug on the right, Jean-Jacques Tachdjian a.k.a. El Rotringo: 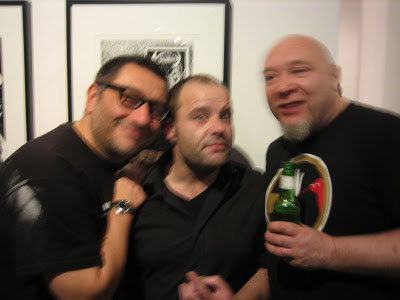 The other two participants in this fuzzy pic (by Pierre Druilhe, who is in the show as well) are Caritte and Besseron, also underground oldtimers from France. J.J. did a completely off-the-wall graphic zine called Sortez La Chienne! in the 1980s. I did some stuff for that, so we go back a long way but we never had met before and so we got a little sentimental about that after a few drinks. Some 20 artists from mostly France are in the show, which was a sort of Charles Burns tribute. I guess he was a big influence on a certain generation. I did the El Borba on the right: 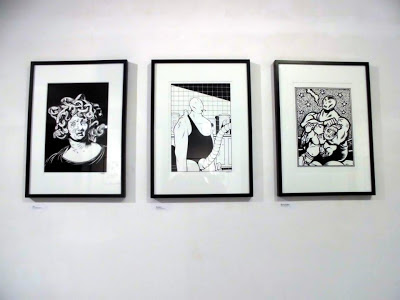 These are silkscreens prints done by La Secu, done in a printrun of 100 each. They are for sale for only 20 Euros per pop, or 300 for the whole bunch. Check for more info http://galerielasecu.free.fr/pdf/PRESSE-11-12.pdf. All in all a great show. Too bad Mr. Burns was not present. The exhibition lasts until 2 February 2013. 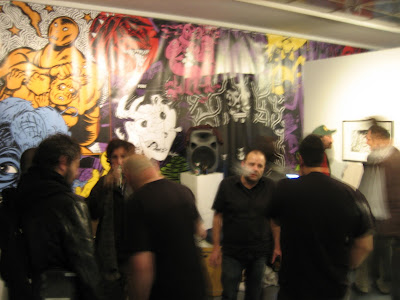 must be a good show, too far for me but... this remind me a book from Charles Burns, "Close your eyes" (LDC) where he do copy/interpret others artwork... that's kind of return

Yes, exactly! A very nice book, that is.