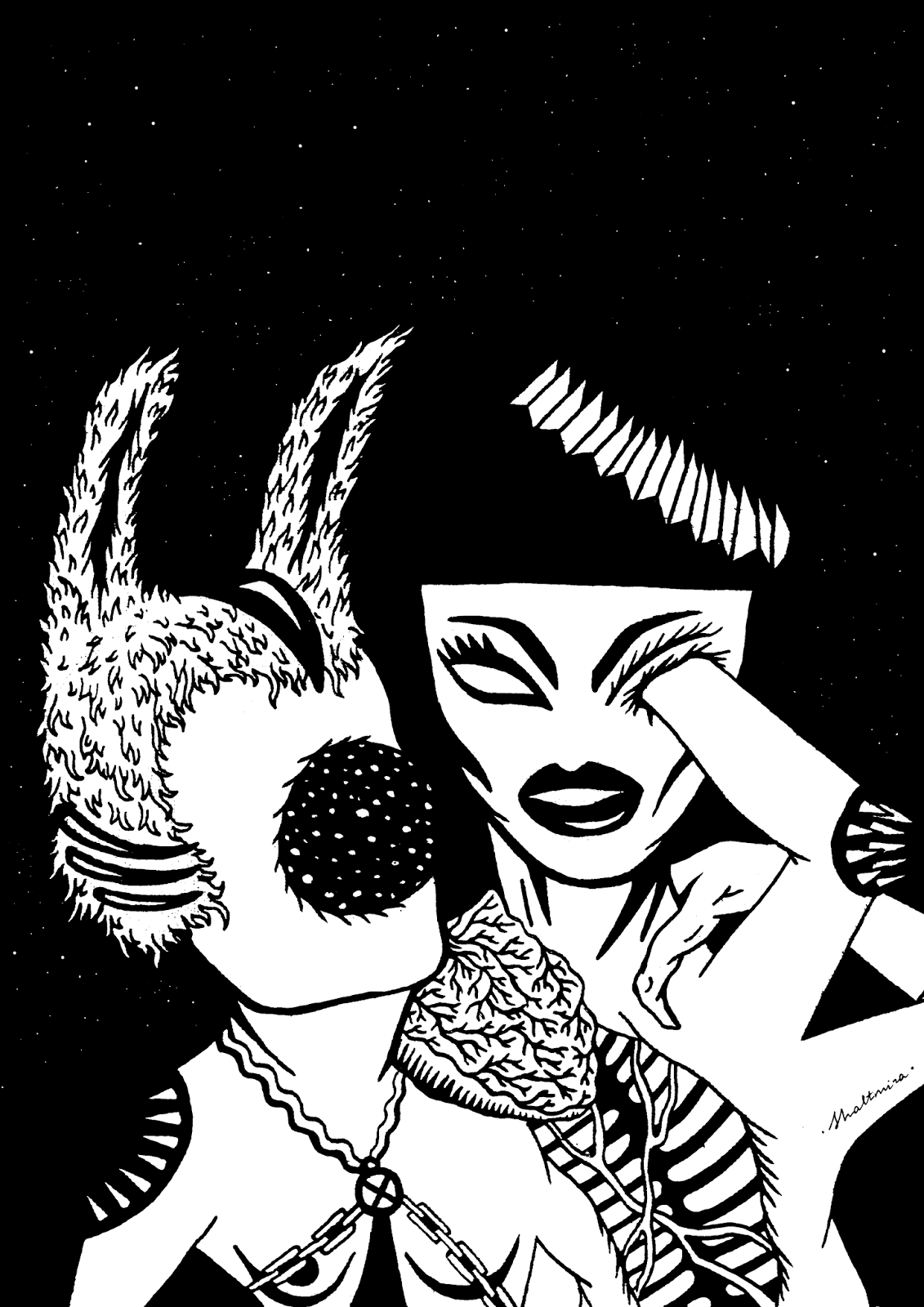 Originally it was drawn on square canvas, which I gave for my friend as a present. But I scanned it before and recently change it a bit, added some space. One day I just felt like looking throw my older artworks, analyzing what I was thinking then, what motives I used, and I felt very interested with idea to "work again with the creatures I once invented", so to say. I was always trying "not to repeat myself", but now I'm developing different approach, more like "positive attitude towards learning from younger yourself", I'm talking about spontaneous and wild ideas in visual expression, accidentally made solutions and sometimes even primitive lines. This practice really helps me in the days when I get stuck with drawing because of overthinking the composition, searching for the best visual solution and being unable to continue drawing since I haven't find THE BEST way to do it and so on. Sometimes it is hard to relax and just enjoy drawing when you "think too much". So it's good to remind yourself what is the main point of drawing at all in the first place. And for me it has to be pleasure and satisfaction. And in a war with my rational thoughts I need to keep reminding myself that.
Posted by Unknown at 4/21/2014 10:02:00 PM

I don’t worry much about composition because nowadays I paint freely and experimentally so the composition isn’t a preliminary task. Actually I’ve never drawn exactly a composition I had thought before: drawing is so slow, after all you’ve spent more time thinking when drawing than before. A philosopher (not sure who) wrote : painting enters a period of decadence when it stop to think with a brush in the hand.

Actually, I found ridiculous the way support-surface and minimalism argued that the surrealist were composing (so they were “old fashioned”). You can deduce compositions from the natural world, however nature never composes. The compositions issued from automatic drawing are similar to the natural world. And I didn’t like either the way some French XXth century artists(not going to write their names) rejected the purists because they were composing: after all the idea that repetition was negating all composition was first an American conceptual and minimalist concern; so the way those French artists said they were rejecting all old and contemporary art and was a bit exaggerated.

Actually I’d like to compose more in the future especially because I like poetry to be well composed.

you're right Gaspard... i would say, noone's missing composition, even support-surface, it's totally part of abstract painting too. I think they do more reject "Mise en scène" of different element, not creating relationship between, prefering using them as objective approach, like a pattern.

i'm also sometimes looking at old characters i did, i tried also to re-use or re-do, but this tired me quickly, so now i think best is looking back while being NOW, using what i learned since this first drawing to make it again another way that i consider 'best'. This means looking for a new method to reveal your intention (here this intention is finding the accident, being more intuitive). It's like "hey let's do this stuff i wanted few years ago, but now using this new technic i have"

also, i can see how hard it is to make something relaxing & out of thinking when you have to do it for special meaning : book, poster, exhibition... it's good to keep moment to enjoy drawing with no goal at the end except yours

so the way those French artists said they were rejecting all old and contemporary art was a bit exaggerated.

i think the speech go farther than acts, it's like tabula rasa, let's do something different, but at the end this mean going nowhere & everywhere, this lead to "post-modernism" - no more progressing line like past to future but a whole thing like a large 'present'.

I have two minds about this.

Under the best circumstances, working intuitively can yield the most surprising results. However, after some years i had to admit that my imagination wasn't exactly unlimited - every artist has a certain number of major themes, and style is defined by limitations. So, expect to repat yourself, there's no shame in it. (unlike i used to think when i was very young and innocent)

Ususally, i am happy with starting in a more or less intuitive way, and have the rationalisations and the darling-killings later.

Cool drawing! i like how the spiked elbow and shoulder draw your attention across the drawing.

I find constant inspiration looking at all my older drawings, and i don't fret about it, i say save every dirty doodle, they will become the masterpieces of the future!

Nice discussion- I am getting a lesson in drawing. Cool drawing too!