DON'T BE AFRAID OF FREEDOM!!! 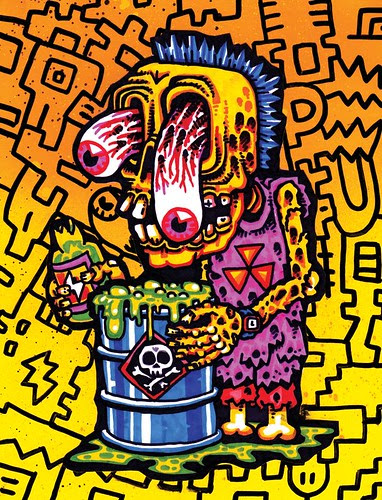 DOG
It's the dog, partially based on this stupid dog we had briefly called "Jaws" that ate my brother's stuffed dragon & one of my Vaughn Bode comics. I pretty much wanted to kill it. 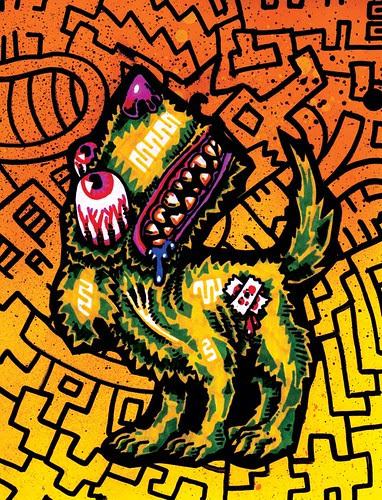 PAPER HANDS
This girl has magic spells for hands & big Japanese theatrical hair that is probably a wig! Oh man. 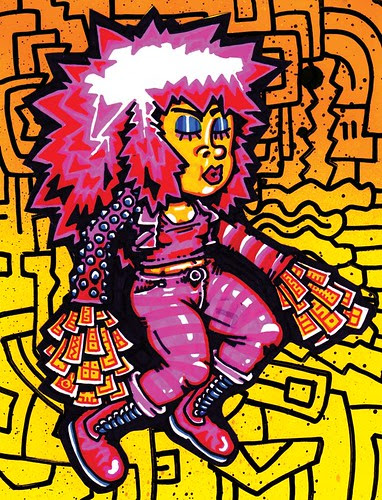 In Oronzo related news, my friend Shawn Mediaclast (the man behind the Museum of Unfine Art which is just about the coolest thing around Eugene besides Goblinko) & i were relating tales of being in the Punk scene at the same time, specifically talking mad sh*t about the political climate, & we got to talking about Berkeley & he eventually asked me, "Did you know this guy with Che Guevara on the back of his jacket? He had one hair thing coming off of his head & let me stay at his house, which was the most disgusting Punk house i've ever stayed at (Clark St. House)." I was like, "YOU KNOW ORONZO?!? From Staten Island?" & the answer is & was yes. He said they talked about how there were so few true individuals anywhere & what the hell is up with that. Anyhow, what do you know!? The world is shockingly small for men beyond time.
Posted by SEAN at 4/11/2007 12:36:00 PM

These are great. I love the universe you're building .
I can't help but find the irony in a guy with a Che Guevera back-patch talking about individualism..

Bitchin, so what are you doing with these? Putting them into a collection of some sorts or are they just for the hell of it?

I knew a guy in highschool who had some weird mental disability, his dad or maybe it was his uncle had to be dragged out of a Mcdonalds because he went in there, sat down to eat a sandwhich and started screaming. Not kidding! Anyway, his family is weird, he's weird, they are all fucking weird.

So this guy was made fun of by everyone in school except for me and my circle of friends because we weren't like that and we were mesmerized by his weirdness. So somehow my brother found out that he made music tapes and had him make one for him. We listen to this goddamn thing and it is the most mind blowing and insane thing we've ever heard in our entire lives. It would blow the brains out of any Dr Demento song in existence. It was a very well crafted conceptual album about David, that was the guy's name, going into outerspace to hang out with space aliens. He had these generic keyboards and other sound effects used in the songs and a really rough audio of him talking and singing through the whole thing. It's been about 10 years but from what I remember there were parts where he was getting ready to go into space and he'd be saying, "Ok, everyone! Are ya ready! Ya ready to go to space!?! Well lets go then! Alrighty... 10...9...8... and so on. He'd do voices for weird characters and there was one nasty fellow named Sneaky Snake. He devoted an entire song to Sneaky Snake and how he liked to steal David's rootbear. Let that be a lesson to all of you, keep sneaky snake away from your rootbear cause he'll drink it!

Another hillarious story about this guy, I had him in art class in highschool and he forgot some assignment and was being scolded by our art teacher. He pulls out this sheet of paper and starts menacingly drawing a picture of somthing, I have no idea what and says to himself very loudly, "Alright, don't forget the picture or Miss (name of teacher I can't rememebr) will bite your head off, chew it up and spit it out like a monster! Or something to that effect. She was standing right there and got really mad about it.

The sad part is the tape was lost. I went to where this guy works at, he cleans at a grocery store late at night. Sometimes if you're there and he's sweeping he'll race around making cartoon noises while pushing the mop or broom. I asked him two years ago about making more music and that I'd pay for a tape of more tunes but he said he doesn't do that anymore.

And on the subject of this guy and to add to the mystery of this person, a friend of mine saw him burying a glass bottle next to a road. My friend came back to the spot a few hours later to investigate and just saw a dug up patch of dirt. What was in the bottle? Why was he digging it up? Why did he bury it in the first place? These are questions I will ask myself for the rest of my life!

Aeron, that story ruled! There need to be more people like that! I think i'm probably just a couple steps away from that, but am too well adjusted & savvy. Oh well. These designs are for a new attempt at a card series, not as limited as doing wrestlers. I just released a preliminary 9 of them yesterday! Want to trade? Luke, thanks, & yeah, i think he was feeling very conflicted about the contradictions between his desire to liberate the people & his individualism & the obvious problems with communism, this has since been thoroughly resolved however.

Yeah, I'm no expert on Che Guevera,so..
That story should be a post! It's amazing.
My brother works with 'special needs' kids and has a disc of this mentally challenged kind rapping over casio rap beats.The kid has a really odd speech impetement that I can't quite describe.I keep telling my bro to put it online, but he doesn't think it'd be ethical.

I'm not giving up on David. I'm determined to get him to make music again. Also, when I saw Napolean Dynamite the first thing I thought was that he was a cheap knock off of David. To explain that further, David wears moon boots a lot, has really frizzed out hair, although blonde. He wears this weird kind of suit you'd find at a vintage clothing store. And he rides this weird looking bicycle around wherever he goes, in all weather. A great character.

And while I'm on the subject I have another hillarious story, or well, not too funny, it's sad actually. A highschool friend of mine told me about this who was apparently in the classroom when this happened. David walked into class late and he was drenched in mud and water, his glasses were broken and he had blood on his face. He stumbled up to the teacher and said, 'Teeeaacher can I got to the nurses office, I got hit by a caaarrr...." The teacher gasped and rushed him down to the nurses.

This poor son of a bitch gets hit by a car riding his bike to school and he still thinks he'll need a pass from his teacher to go to the nurses office!

Sean, you keep working colors like that, and we could start a Psychedelic version of Alcoholics Anonymous, -Whenever the urge hits you, look at the Yellow!, still weak? about to quit?! Watch the PINK! the PINK!!