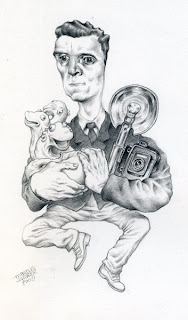 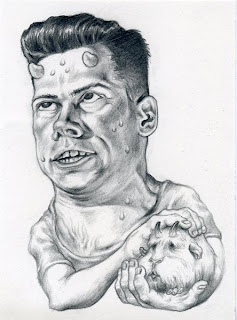 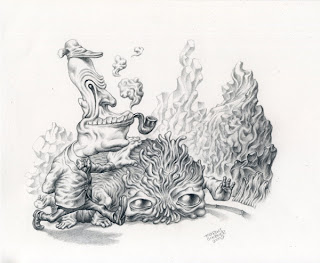 At last a second posting. Lost my password. But thanx to Fufu here are some drawings i did for a groupshow at gallery Feinkunstkrüger called don't wake daddy. First one is a journalist with some puppetdragonworms i dreamed about some years ago, second one is Satan with pet. I used a stockphoto from the fifties. A thin guy at the gym, he got this marvelous manic look which fits the look for the character perfectly me thought. And the last one is my version of a famous german comicbook character called Nick Knatterton. Invented by an illustrator as a satire on comics. You know they all hated comics back in the fifties. But he became pretty famous for this one and he got to draw it till his hand became numb.
well thats all

Fucking hell, this is great!

Love them all! The Nick Knatterton one is fabulous - is that character known at all outside of Germany?

I have heard of Nick Knatterton - I may have seen some translated comics in Holland in the 1970s and there might have been some floating around in Scandinavia, but he seems to be a blast from the past. Not so in Germany, I gather?

Beautiful drawings, Marcus. You come up with the craziest images!

Hey, Thank you guys. And yes, Marcel, a blast from the past, but still well known in germany i guess. Everybody knows his catchphrase. Hey Aeron, got to say that, really love that amazing videocovercollection, what a joy. Nice Weekend to you all.

love them ! pencil medium is my favourite by far !