I hear that Gary Gygax, the inventor of Dungeons & Dragons just died at age 69. 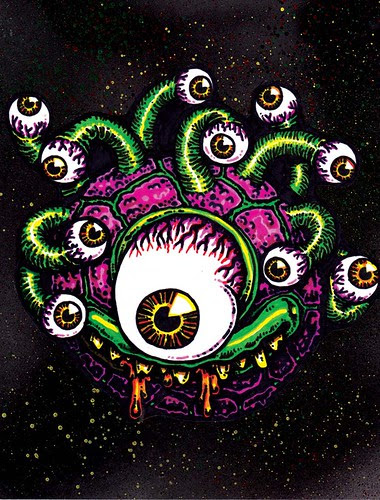 The whole "imagination with rules" thing is pretty weird, but apparently i like it. Making up little rules for everything, & then breaking all the rules. The best thing about Dungeons & Dragons was the big lists & the monsters & that they hired artists who weren't so polished & had their own weird, quirky styles. Old role playing games were more like zines & self-published stuff in that they hadn't been so processed by the big money concerns & were pretty flukey & strange & all sorts of crazy stuff got thrown into them. The old D&D & AD&D books are right up there with the Johnson Smith Catalog & Mad Magazine & Maximum RocknRoll & Factsheet Five in terms of compendiums of weirdness with small type.

That's weird you should bring that up, I was thinking of doing just that. I have a big Basil Wolverton post that's about ready to go but I should certainly pay tribute to the Dungeon Master first! Good suggestion. I never played it myself and could never wrap my head around the idea of role playing games. I think I was always of the mind, fuck that I'll just play Zelda, as a kid. But when I was 6 or 7 years old I remember being fascinated with my father's DnD books, he had a few although he never got into the game itself. And I'm sure that those old DnD books with all those crazy monster illustrations played a role in initiating my lifelong passion for the monstrous in art.

Gygax must be a fake name, right? Either way, what an awesome name...
RPGs have also been great repositories for good fantasy/horror drawing- Pretty much as far as my interest goes with RPGs.

I,ve always been curious about that eyeball monster, I used to always mix it up with monsters from Doom.

It's a Beholder, they're these hyper-intelligent haters.