Here's an example of the kind of stuff that's on the back of my new Monsters, Weirdos & Creeps cards. (they're still being cut & packed into their packs so they'll be mailed out by friday!) 27 different cards with a different Monster, Weirdo or Creep on the front & then a comic, some weird art, a profile of a cool dude (Ed Roth for example) or a culturally important item (pinball, coney island, hot dogs) on the back. 7 cards to a pack. Secret additional cards will appear in any Goblinko releases for the rest of the year. 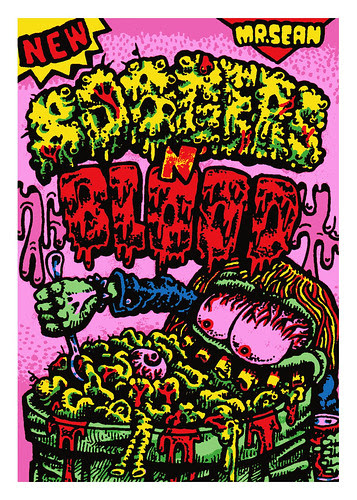 My little brother Daniel (aka Danny James) formerly of the Cuts, now doing solo music came up with the boogers & blood concept when he was working on his master's thesis in advanced brattyness at age 9, after noticing that big juicy boogers have blood on the end of them frequently.
Posted by SEAN at 11/12/2008 02:03:00 PM

Pink and Yellow!!! Ha, the pic matches the blog very nicely. Fucking nasty and awesome stuff though. You might consider when you or if you do more of these cards to maybe have a jigsaw picture that the whole set, when put together, can be pieced into? I remember a Charles Burns card series that was like that and every 80's card series worth its sugar in pink sticks of gum that are stronger than metal!

Also, my two paintings are done for the zine. I was going to email them to you tonight but I want to spend an hour cleaning them up in photoshop first so I'll do that tomorrow and have em off to you.

Aeron, it's kind of funny because i've been using the pink & yellow from the Sex Pistols record as colors just recently & then... here it is. So yeah. I'm into lighter purple & lighter green too (Green Goblin). & yeah, the last sheet of cards has a big picture puzzle to make.

the coloring is perfect, i love that pink vein on the hand and the small touches of red that separate the teeth from the.. whatever that deliciously nasty stuff in the can is!

Hey, i enjoyed listening to your little brother's songs, i guess all that brattyness payed off in the end.