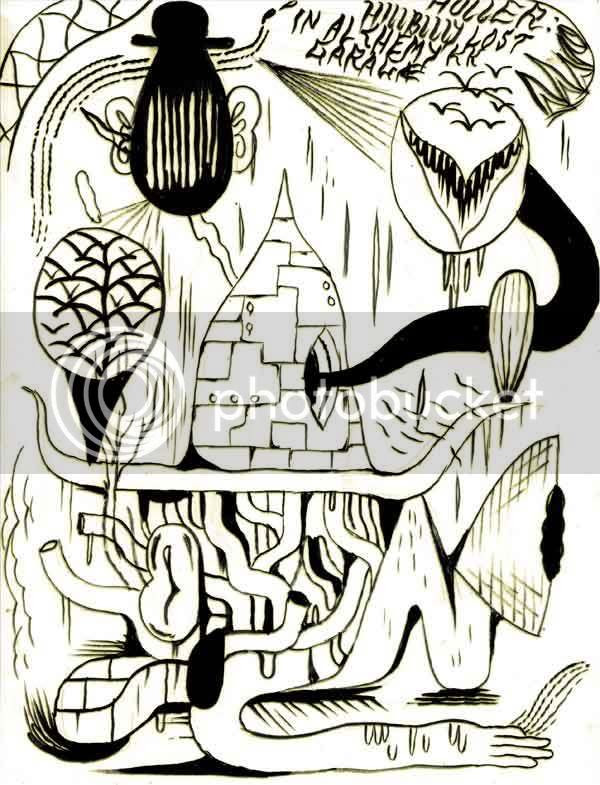 I've been doing a lot of really loose brush and ink drawings lately while trying to work on larger, more concerted efforts at the same time. Problem is, I really like the sketchier stuff a lot more, both in terms of finished product as well as enjoying the process.Drawing without preparation kind of goes against my grain in a way; I tend to appreciate in art a certain kind of cleanliness of approach.Not the look of it, but just the sense that it's directed, that you can discern clear intent.
The problem is that when I attempt that kind of thing I become mired in strategic thinking.I bounce so many possibilities around in my head that I basically loose steam.It's no longer about enjoying the process of drawing or painting or whatever, but instead it's about trying to pin down something really elusive. Like trying to catch a phantom with a bear trap or something.
I struggle against it all the time. Comics are still my favorite art form, probably. They're strategic by nature. They even involve grids, usually. I think like a lot of people, I really want to create things like the things I most enjoy, but at this point I sort of think it's just not in the cards. I can write them. I've written out full scripts that I think are pretty good, but when it comes to executing them, I end up with lifeless, dull illustrations.
I think my goal at this point is just to let things go. I hate the word, but an organic or wholistic approach to art and drawing, where it's woven into my daily life and just sort of happens is something to shoot for. Now I have to nail down how to do that.
It never ends...
Posted by Uland at 9/03/2008 12:37:00 AM

That part is incredibly difficult. I find I can take the crappiest pen or pencil I have and fill a piece of copy paper in a few minutes at the kitchen table while having a drink after work and produce some of the most inspired, fluid imagery that I ever do. I think those sketch pages look great, but they don't frame well, they have no color, they don't say anything (except in the sidelines maybe a grocery list or something I wanted to look up on the internet). I have tried to get this approach in comics - to just start drawing and get into the details and the graphic of it all but every time I get 3 pages in the characters start to become characters and start to chase each other around or talk or some other bullcrap. Finding the way to work like you are talking about and still produce finished pieces that you think can be shared is the toughest part. How to capture that moment when you make a new kind fo shape or line and not ruin it by trying to do it over again on a better, larger piece of paper just for the sake of it being "done."

The more you tell yourself to let go, the more the mantra becomes an obsession that no longer means anything. I'm sure there is a way around it...

hey man, I hear you. I struggled with this for years then finally it just let go. Just draw and dont think. You will analyze later. It will all work out. It is rather exciting to have that sense of danger cuz you could mess up. Have fun

I dig all the weird things I can see in the abstract imagery here, the circle with black triangle to the left makes me think of a hot air balloon that has a vast sytem of nerves covering its surface, a living hot air balloon to feast on birds? The thing at the center reminds me of a pyramid like structure with the body of an abstracted octopus.

So far as process, if you get caught up in a lot of ideas maybe you should try limiting yourself to a set of this this and this. I'd like to see you experiment with painting on layered sheets of plexiglass.

"I'd like to see you experiment with painting on layered sheets of plexiglass." fantastic suggestion Aeron. I have no advice, i feel that the sort of artistic unease is directly related to non-artistic life things so... who knows what is or isn't being disclosed! Can't argue with a period of free-form non-goal oriented art though, unless you need to make deadlines.

This style looks very impressive, reminds me of Philip Guston for some odd reason.
Please post more of this stuff!

Thanks Zeke!
I think you're right about the art troubles in a way Sean, but I think all aspects of our lives are probably tied up in art, just like they are in every other aspect.I envy lots of people on EBD cause they seem to just go for it. I've spent the last year or so wrapped up in a lot of philosphy/theology type stuff and it made me look at what I do artistically in a different light.
I'm getting it back though. I tend to get really wrapped up in things for certain periods and head off in strange directions,only to find myself back at square one, which is good to get back to.