An Interview With Noémie Barsolle 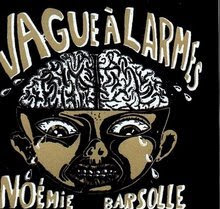 I emailed Noemie Barsole in order to get the new issue of Saignante ("Bleeding Woman" I guess could be an acceptable translation for "Saignante"; The blog of this fanzine is to be found here)… She draws very well. Her work is strong and true to her life. She agreed to answer some questions about it. You can have a look at her blog here… And don’t forget to hit the comment button If you wish to tell her something, I’m sure she will read them.


G: Hi Noemie. How are you?
N: Very good thanks. I have a small cold but nothing serious.

G: I’d like to ask you some questions about Vague à larmes. From my opinion it is a beautiful book. Where did you draw it ? Did you do it in a café ? In you room ? With friends ?
N: I began the sketches and the first drawings at my job (I worked at the time in a survey institute), I was drawing whilst interviewing people on the phone. Then I drew all the other pages alone in the woods, during nice sunny days of the summer time. Actually I got the collages ready at home listening to the radio and then I moved to settle down in the woods.

G: What did you feel when you drew it? Was it this sort of lonely anguishe and the vulnerability which is present at the beginning of the book?
N: Actually I was entangled with very complicated sentimental stories which inspired me most of the book. But originally the monstrous character came from a dream. All the story "vague à larme" relates to a period of my life when I felt alone confronting existential and practical questions about love, couple relationship, and what they generated inside my body. I was confused by alcohol induced euphoria and by the exaltation of affective or sexual love stories. All that created inside of me obsessions and true drifting which I needed to flush out by means of drawing.

G: In page 5 a mysterious boy, who is into bondage, appears. He looks very cute actually. The walking girl is scared when she realises that he has spied on her. Then the boy is transformed into a grotesque but reassuring monster. I’d like to know more about this… Could it be anguishing idealisation of the unknown which is transformed after a while into reassuring but disgusting trivial fact?
N: I am going to describe this character: he doesn’t physically exist. He is the fruit of the girl’s imagination. Some kind of undisclosable phantasm which is embodied in this grotesque, mysterious and scary figure. She doesn’t know him but she has known from the beginning that he has followed her. As something which she has voluntarily repressed which is quickly coming back and which you have to cope with. Somehow it is similar to waking up from a nightmare without knowing the end of it. He keeps his mask because she doesn’t admit who he is. This character (it is kind of a revelation) will give birth to anguishes and introspections which are at the core of all the rest of the book.

G: Where does symbolism appear in the work? For example could the last drawing be an overview on different possible lives for the girl we saw at the beginning ?
N: All the images are full of symbolism. Each one reveals a fragment of my intimate life. It is more or less clear to the reader and limpid for me. Sexes represent men and women , and in a way I am the young girl. The masked character is more complex. At the beginning he is hidden, he isn’t much scary but he is intriguing, he is the repressed element which gallops in the direction of consciousness and self. He becomes then a bit more monstrous when he half unveils and his sight will bring the girl into the mazes of her thoughts and she will by that means live an introspection by revisiting her innermost soul, her fantasy, her fears, her anguishes, in short everything which disturbs her and makes her doubt about the elements of her daily life. The next to last image represents her total immersion inside of herself with the possibility to start again from the beginning. The last character who is covered with eyes is the masked man whom we saw at the beginning. He comes back as a chorus but, anyway, she has moved on because she has unmasked him, she understood him. The eye could symbolise clear or guilty conscience (inside the grave the eye was watching Cain) on the contrary the masked man at the beginning belonged to repressed feelings and unconsciousness. 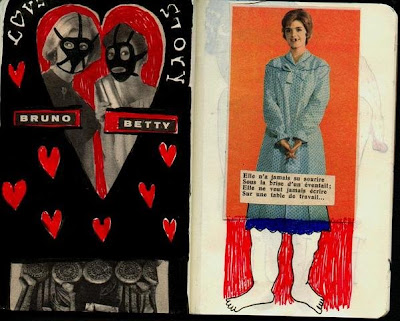 G: There are pictures related to everyday life and depressed feelings in Vague à larmes. Are those drawings expressing some kind of revolt?
N: Possibly… But it is an innermost revolt. I didn’t denounce anything. I just tried to express deep feelings which I encountered at a time when I felt very lonely, very lonely in "my woman’s role". A woman who drinks is not respected, a woman who flirts is a whore, and a woman who does not want children isn’t normal, she is called a nullipara. This scientific term contains the word null ! I had to encounter criticism as often from men than from women and systematically. This book came from my incapacity to defend myself by speaking and as a consequence it could be a type of revolt.

G: Do you think intimimacy and social commitments are compatible in a work ?
N: Hem… I think the previous answer could work for this one as well. But it’s true it is difficult to be understood because when you talk about yourself, you are nourished by your own universe which could be obscure for many people. And political commitments means something only if they can be shared, or could make somebody want to share them. 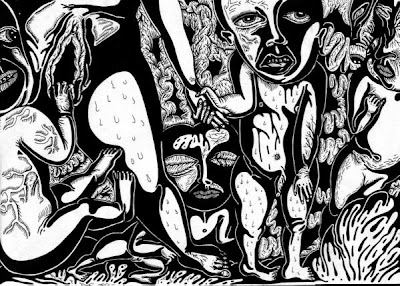 The interview was in French. I had to translate it. If it doesn’t read well enough for you can send me an email with corrections (I would appreciate it). Thanks!

Really cool Gaiihan. I'm interested in reading her work- the drawing is great.

Great stuff Gaiihain. I got to see some books by Noemie Barsole whilst in Berlin and they looked amazing!
She's done some fantastic drawings for VV too.

noemie is both an amazing artist aswell as funny person. she's real cool gettin' drunk with! she rawks!
crippaXXX

yeah, thank you "crippaXXX", how come that, ah.. i mean, how do you, ahh... what the hell!!
how come someone doesn't like a girl who drinks?!

seems like a Through the Mirror Glass kind of prejudice.

hmm paleo...i don't really understand y'r first part there. i don't think noemie thanked me for sayin' that "she's really fun gettin' drunk with". this she already know. i think more she's happy that i wrote "she's both an amazing artist aswell as funny person...'n that she rawks!"
i know plenty girls that are real fun gettin' drunk with, 'n also a helluva lotta guys who definitely are NOT.
R'n'R,
crippaXXX

Oh, sorry for my poor grammar!

i was trying to both agreeing with you and addresing Noemie concerns in the interview, but i'm an ass.

the new pictures really add to the interview, they're both great.

o.k, now when you said this, i can totally understand what you meant already in y'r first post!
btw, when noemie drinks, she DRINKS...me under the table!
'n seems like we both get those really BAAAD hangovers the day after. you know the ones that gives you hardcore depression'n'a bad mood...
R'n'R,
crippaXXX